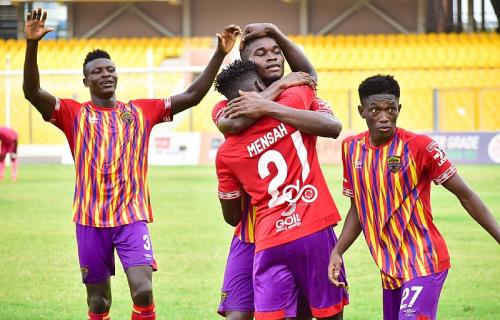 The Phobians today hosted the team from Elmina at the Accra Sports Stadium to battle for points on matchday 25.

Although the home team could have led at the break, a penalty squandered by striker Victor Aidoo meant that Sharks stayed in the game on the back of a goalless draw.

Later in the second half, Isaac Mensah scored in the 67th minute to shoot Hearts of Oak into the lead.

Maintaining momentum and piling pressure on the visitors, the Phobians doubled their lead through a Benjamin Afutu header in the 78th minute.

Eventually, Hearts of Oak have cruised to a deserved 2-0 win and now second on the Ghana Premier League table.

The capital-based club is just two points behind rivals Asante Kotoko and looks set to battle the side for the league title in the remainder of the season.