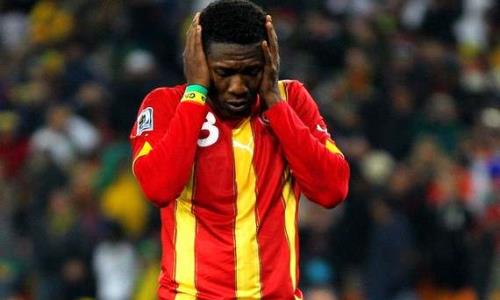 Ghanaian legend, Asamoah Gyan has reechoed that he is still being haunted by his penalty miss against Uruguay in the quarter-finals of the 2010 World Cup.

The Black Stars hoisted the flag of the whole continent during that tournament and went all the way to the quarter-finals. Following a 1-1 draw at the end of 90 minutes, the match went into extra time where Ghana was awarded a penalty kick.

Gyan stepped up but sadly fired hits kick into the crossbar and over. Uruguay eventually triumphed on penalties to knockout Ghana.

In a recent interview following his summer move to NorthEast United in India, the goal machine has shared that he is finding it difficult to forget that painful moment that broke the hearts of an entire continent.

The 33-year-old shared, “In the 2010 World Cup, we were knocked out in the quarter-finals in controversial circumstances. It was against Uruguay, and I missed a crucial match-winning penalty towards the end of extra time, after a Luis Suarez handball”.

“The penalty miss is something that I will never forget. It's part of my life now. I am not the only player, who missed a crucial penalty. We could have become the first African team to reach the World Cup semifinals”.

He added, “Sometimes when I am alone, I think about it and it still hurts. I feel, 'Oh! Maybe we can play the penalty again so that I can redeem myself."

“Life goes on, I need to forget about it and live my life”.

Meanwhile, the former Sunderland super start has started a new chapter of his football career in the Indian Super League. He marked his completive debut for his NorthEast United side in a goalless draw game against Bengaluru earlier today.