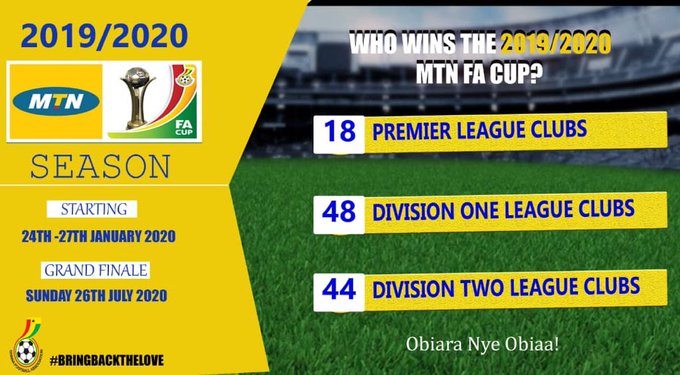 The 2019/20 edition of the MTN FA CUP will be launched today at 11am at the Ghana Football Association (GFA) Secretariat.

The draw for the preliminary round will comprise of all 48 Division One League clubs and qualified clubs from the Regional 2nd Division leagues.

The competition is slated for the weekend of January 24-27, 2020 at match venues across the country.

The official launch of the competition will also be used to outdoor some exciting packages for families and friends who will visit the various stadia for MTN FA Cup matches and also outline the innovative ideas the new FA Cup Committee intends to implement for the season.

Asante Kotoko are the current champions, having defeated Hearts of Oak 3-1 in Tamale.

Below are the qualified 2nd Division Clubs who will drawn with the Division One Clubs: