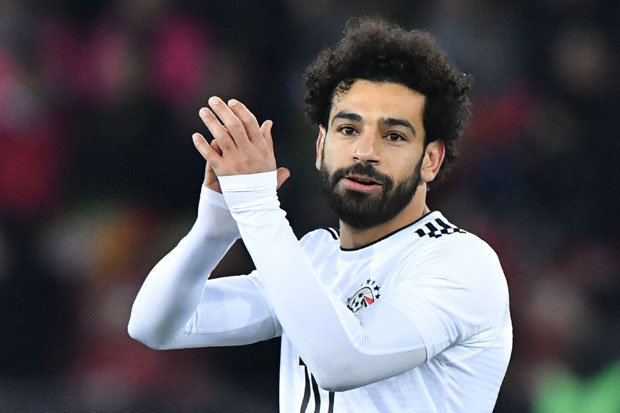 Egypt and Liverpool forward Mohamed Salah will carry the hopes of the Africa Cup of Nations hosts on his slender shoulders just weeks after winning the European crown with his club.

Egyptians say that all 97 million of their compatriots will be rooting for Salah when the Pharaohs kick off the tournament against Zimbabwe on Friday.

Salah, 27, will also be hoping to banish the nightmare of last year's World Cup in Russia when he played with a barely healed shoulder injury, Egypt were eliminated in the first round and their hosts in Chechnya used the team for political purposes.

He comes into the tournament on a high, having scored the second-minute penalty that put Liverpool on their way to winning the Champions League final against Tottenham in Madrid.

The Egyptian also won the Golden Boot for the top scorer in England for the second season in a row, although this time his 22 goals were equalled by Liverpool teammate Sadio Mane and Arsenal's Pierre-Emerick Aubameyang who share the award with him, making it an all-African affair.

Liverpool though were pipped to the Premier League title by Manchester City.

"You just mustn't let him get the ball, because something always happens when he has it."

Salah's mood and fitness contrast to this time last year when his shoulder was injured as he was wrestled to the ground by Real Madrid's Sergio Ramos in the 2018 Champions League final in Kiev. He had to go off and Liverpool lost 3-1.

Although clearly not recovered, Salah arrived in Chechnya for the World Cup and was promptly paraded with the republic's president Ramzan Kadyrov.

He was only fit enough to be a substitute in the first two games but returned for the final match against Saudi Arabia and scored, but could not prevent Egypt slumping to a third defeat.

The World Cup debacle also revealed that Salah's supporting cast is nowhere near the level of their star man – everything revolves around him.

Leading his country to its eighth African title would be the crowning glory for the man who grew up in the Nile Delta village of Nagrig.

After Liverpool beat Spurs in this year's Champions League showdown, an emotional Salah said: "I made many sacrifices for my career. I came from a small village and went to Cairo. To be an Egyptian at this level (of the football world) is unbelievable."

"I coached Mohamed Salah when he was still a child and his talent was clear from the day he was born," Ghamri Abdelhamid Al-Saadani, his coach then, recalled to AFP.

He said Salah's success was not built on talent alone: "He had an iron will and huge amounts of perseverance."

Encouraged by his football-mad father, Salah moved on to Tanta, the main town in his home region of Gharbeya, before moving to Cairo. Opportunities in Europe soon beckoned, starting with Swiss club Basle.

In 2014, Salah moved to Chelsea but success did not come in that first stint in England. It was only when he moved to Roma that the goals began to flow and he earned his move to Liverpool.

Salah makes no secret of his religion, falling to his knees after he scores. His wife Maggie, wearing a headscarf, and his daughter appeared on the pitch at Liverpool's Anfield home on the last day of the Premier League season.

Compared to the excesses of Premier League footballers, Salah leads a modest life.

Back home, his distinctive smile and curly hair feature in TV adverts, on billboards and on wall murals.

He has made a point of speaking up for women in the Muslim world.

"I think we need to change the way we treat women in our culture. It's not optional," Salah said after he was chosen as one of Time magazine's Top 100 most influential people in the world.

He has also lent his highly visible support to anti-drug campaigns aimed at teenagers.

With the idolisation comes the inevitable media attention and Salah has hit out at journalists who besiege his house in Nagrig where he still spends holidays.

"I call that a lack of respect for my private life and a lack of professionalism," he tweeted.

Yet that outburst did not prevent him posting, a few days later, photographs of his toned stomach as he sunbathed.