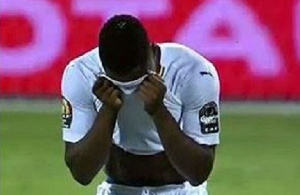 Ghana and Leeds striker Caleb Ekuban has issued an unqualified apology to Ghanaians after he failed to convert from the spot for the Black Stars during the penalty shootout against Carthage Eagles of Tunisia.

This propelled the Tunisians to win 4-5 as all their players scored during the shootout at the round 16 stage of the AFCON in Egypt.

The player after the game took to his twitter timeline and wrote; “I’m really sorry”.

The Carthage Eagles of Tunisia will be meeting with the Barea of Madagascar at the quarter-final stage of the competition.

The match between Ghana and Tunisia ended 1-1 after Taha Khenissi’s shot went into the post of the Black Stars but the Stars levelled up the game after Rami Bedoui headed into his own net to force the game into extra-time.

With neither side able to find a winner in the 30 minutes, the match went to penalties where Caleb Ekuban’s miss had an effect on the Black Stars from processing into the next stage of the competition.

The Black Stars also got a goal scored against the Tunisians wrongfully disallowed by the referee.