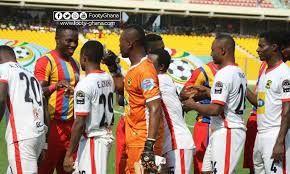 Liberian referee Hassen Corneh will take charge of the 2019 President Cup between Asante Kotoko and Hearts of Oak at the Baba Yara Sports Stadium on Sunday, September 8.

The experienced referee will be assisted by his compatriots Sekou Kanneh and Joel Wonka Doe, while Jerry Yekeh has been named the fourth official on match-day.

Nigeria's Babagana Kachalla will be the Match Commissioner.

The match was initially scheduled to take place on September 1, 2019, but has been postponed to September 8.

This year's President Cup promises to be a keenly contested game after Kotoko beat Hearts 5-4 on penalties in the semi-final clash of the Normalisation Committee Special Competition.

The Porcupine Warriors will be looking to bounce back from their recent defeat to regional rivals Ashantigold on penalties in the B.K Adusei Cup last Sunday.