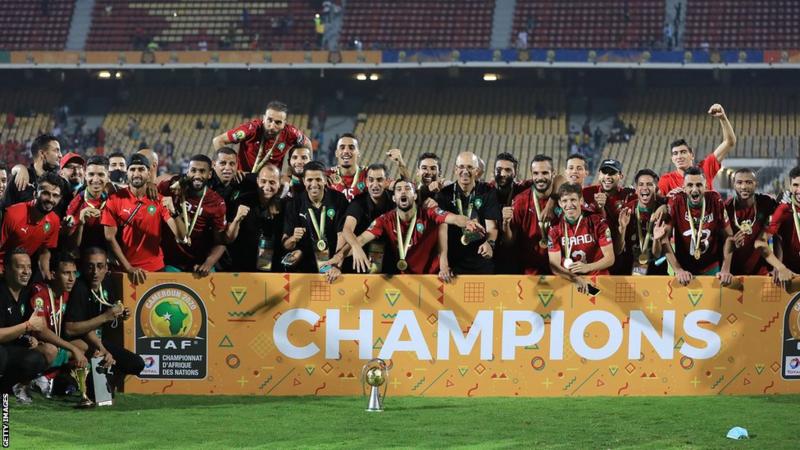 On Sunday, the largest tournament featuring international teams to be played since the coronavirus pandemic began ended as Morocco won the African Nations Championship (CHAN) on Cameroonian soil.

The tournament for players based in their domestic African leagues featured 16 teams and four stadiums in three different cities: Douala, Limbe and Yaounde.

One of the major threats was of course Covid-19 and although all but three delegations were affected by the virus, not only did the teams play all their games but there were no delays to matches either.

Before the tournament, Fifa president Gianni Infantino said it was "important to show to the world we can organise such games in Cameroon, in Africa, to give hope to the world that 2021 will see normality come back."

So how did the CHAN go? BBC Sport Africa has been taking a look.

Despite the measures put in place to protect teams, 13 of the 16 delegations reported failed Covid-19 tests while 16 officials - including referees - working for the Confederation of African Football (Caf) were also affected.

On the eve of the tournament, Caf announced that players were to be tested 48 hours before every match, with some 10 players on stand-by to join squads should any of the latter suffer a serious outbreak.

In total, players from 11 teams tested positive for the disease - with DR Congo the worst affected as nine of their squad were reported to have the disease. There were though serious complaints by DR Congo coach Florent Ibenge, who had questions about the efficiency of some of the testing.

"It's not human what they did to us," DR Congo coach Florent Ibenge insisted. "I was put on medication when I was not sick. I did not suffer from Covid and I have been declared as having Covid and that is not normal.

"I'm not the only one. Our entire delegation went through this. I had players who couldn't play when ultimately they did not have Covid. It's bordering on criminal."

All delegations were supposed to live in bio-secure bubbles in their hotels, but there were reports of several breaches and champions Morocco twice refused to stay at Caf-approved hotels.

"To limit the chances of contamination … we felt it was more appropriate to go to a small, very clean and very average hotel," Morocco coach Houcine Ammouta explained.

Organisers also took action to try to prevent the virus' spread in stadiums themselves.

Crowd capacity was limited to 25% for group games and although there had been plans to increase this to 50% for both semi-finals and final itself, these were scaled back - meaning that the 25% capacity stayed throughout.

While locals could appreciate the underlying reasons for the decision, one fan echoed the views of many by saying that the atmosphere was badly affected.

"Cameroon has lifted up expectations but the pandemic has limited the ambiance that normally comes with football," he said.

Cameroon has been affected by divisions along linguistic lines in recent times, with the government having been battling separatist fighters since 2016 in the English-speaking North-West and South-West regions.

Host venue Limbe is in the South-West and on the eve of the tournament, security fears were heightened as a homemade bomb exploded near the stadium.

Thankfully, there were no injuries and the rest of the tournament passed off without incident.

The government had taken various measures to ensure safety at the tournament, including more soldiers on the street, helicopters in the sky and a ban on motorbikes and taxis going within one kilometre of the stadium.

With the likes of Liverpool duo Sadio Mane and Mo Salah and Manchester City's Riyad Mahrez among the African stars set to play in Cameroon next year, Europe's leading clubs will hope there are no further issues.

One thing teams did not complain about was the standard of the four stadia, although there were some concerns about the training pitches which organisers may have to address ahead of next year's Nations Cup.

All four venues - two in Douala, one in Limbe and one in Yaounde - are set to host matches at the 24-team Nations Cup in January 2021.

Residents of Limbe were not impressed by the impact the event had on their day-to-day lives, with many saying they were left without water as much of it was directed to the stadium instead.

"Whether you have your money or not, you don't have water to drink," said one. "Not even water to shower because of the CHAN. I don't think that's a good idea. The government should wake up from their slumber."

A further three stadia could potentially be called into action next year - a second one in Yaounde and one each in the cities of Bafoussam in the west and Garoua in the north - with Caf yet to determine how many stadia will be used.

But the organisation's president was more than satisfied with what he saw during his short stay in Cameroon, calling the tournament a 'success story'.

"The world class stadiums here are something to marvel at," said Caf president Ahmad. "Cameroon … has been a great host. There are areas of improvement but that is the case everywhere in the world and we will work on them together."