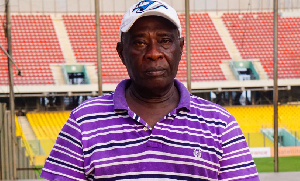 Great Olympics coach Annor Walker is pleased with the kind of competition that has existed among various clubs in the ongoing Ghana Premier League campaign.

The 2021/22 domestic top-flight enters matchday 13 this weekend and according to the coach, the competitiveness level of the league currently makes it better than last season.

According to him, relegation threatened teams in the 2020/21 season like King Faisal is causing many surprises having defeated Premier League powerhouse Kotoko and Aduana Stars.

In an interview with Koforidua-based Bryt FM, the Black Stars B coach said, “Honestly, this season has been competitive than last season because relegation threatened clubs like King Faisal have changed the narrative this campaign. I believe the current campaign is better off” he said.

“King Faisal were battling relegation last season and so, for them to turn things around this season tells you we are not playing an easy league”

“Again, it is not easy to beat a team just like that. Last season, the big teams showed prowess but it is not like that this season. The points difference is not huge” he said.