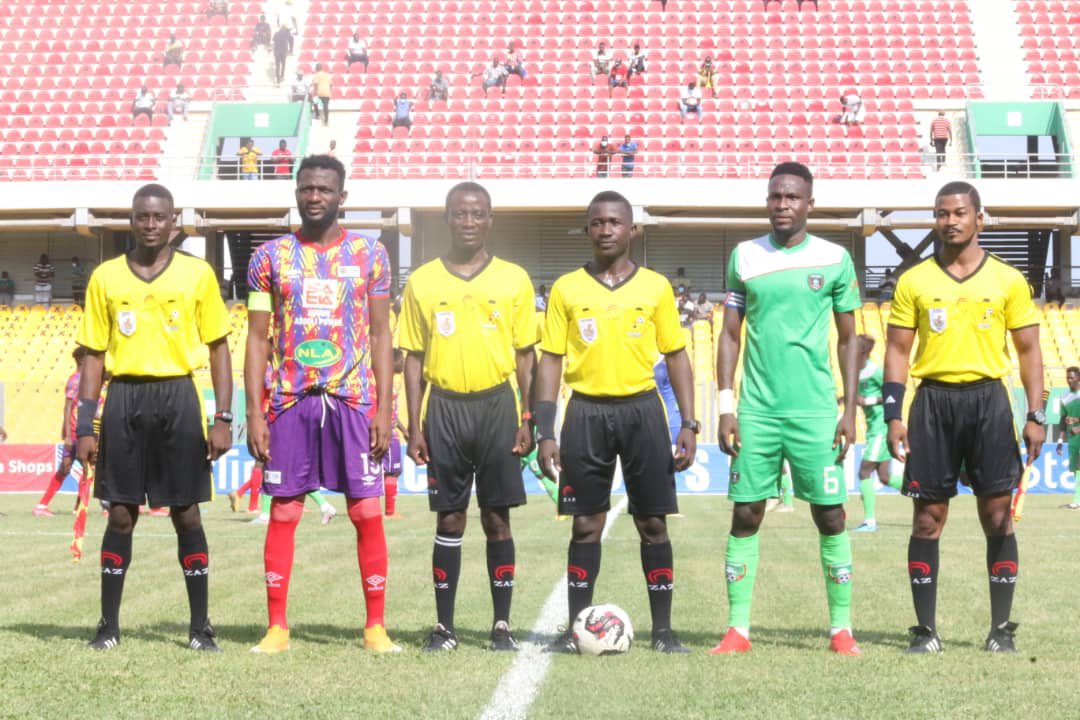 Hearts of Oak have made a strong push to enter the top four of the 2021/22 Ghana Premier League season following an emphatic 4-1 win against Techiman Eleven Wonders on Sunday afternoon.

The Phobians today hosted the side from Techiman in a matchday 13 encounter of the 2021/22 Ghana Premier League season.

In a game played at the Accra Sports Stadium, Hearts of Oak took the lead after 19 minutes courtesy of a goal from young midfielder Salim Adams.

With just that goal separating the two sides after the halt time, the two teams combined for four additional goals in the second half.

Striker Kofi Kordzi netted a brace in the second half for Hearts of Oak before Daniel Afriyie Barnieh sealed the win with a fourth goal in the 62nd minute.

Late in the game, Tetteh Nortey netted a consolation goal for Techiman Eleven Wonders as Hearts of Oak cruised to an eventual 4-1 win after 90 minutes.

Elsewhere in Obuasi, Ashanti Gold SC put up a ruthless display as the side condemned Elmina Sharks to a 4-0 defeat.

The Central Region-based club since the start of the 2021/22 Ghanaian top-flight league season has struggled to compete.

As a result, the team looks headed for relegation and continuously struggles to pick points from games.

Today, Elmina Sharks were hosted by Ashanti Gold SC at the Len Clay Sports Stadium in Obuasi in a game serving as a matchday 13 encounter of the Ghana Premier League.

With the Miners dominating play throughout the 90 minutes, Seth Osei bagged a brace to ensure the side run away with the maximum points.

On the matchday, Elijah Addai and Yaw Annor both scored in the first half to inspire Ashanti Gold SC to record a delightful 4-0 win at the end of the 90 minutes.

In the other games, the match between Medeama SC and Accra Great Olympics ended goalless. Meanwhile, WAFA SC drew 1-1 with Dreams FC with Aduana Stars fighting to secure a 1-1 draw with Accra Lions in Dormaa.

Find full results from games played in the Ghana Premier League on Sunday in the attachment below: