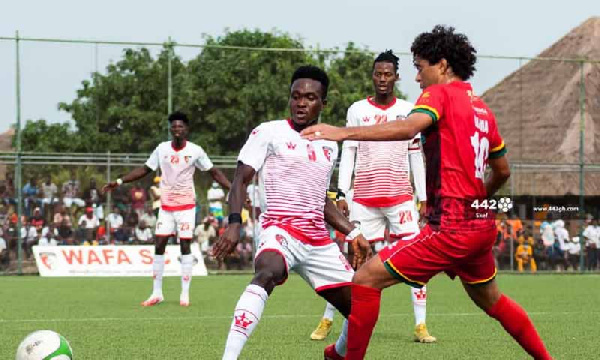 The 2021/22 Ghana Premier League season is continuing this weekend with loads of action to look forward to.

Gradually, the second round of the ongoing Ghanaian top-flight league has also taken shape with some teams fighting for top four while others battle for points to avoid relegation.

Today, one of two matches that are scheduled to be played will be staged in Sogakope when WAFA SC hosts Asante Kotoko at the Red Bull Arena.

In what will be a matchday 27 encounter of the campaign, the visiting team, Asante Kotoko is the favourites to amass the maximum points.

Nicknamed the Porcupine Warriors, the team from Kumasi has failed to record a win in the last two games of the Ghana Premier League.

With fans unhappy, Coach Prosper Narteh Ogum has travelled with a strong squad hoping his team can bounce to winning ways.

The home team, WAFA SC is having a season to forget thus far. Due to the team’s inconsistencies, they are battling relegation and may not survive at the end of the campaign.

Today, the team is aiming to add to the troubles of the title-chasing Asante Kotoko to bolster its chances of escaping the drop.

The clash between WAFA SC and Asante Kotoko today has been scheduled to start at 15:00GMT.