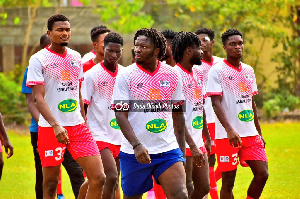 Hearts of Oak will be seeking another win following last week’s 3-0 win against Accra Lions at the Accra Sports Stadium when they host Dreams FC on Sunday.

Samuel Boadu’s outfit are chasing a second consecutive win on home turf in matchday 27 of the Ghana Premier League.

With Muntari and Samuel Inkoom available, the rainbow boys could prove to be a tough side against Dreams FC.

The Phobians are 4th on the league table with 40 points after 26 matches and will hope to win to stay put in the top four. Dreams FC are on 13th position with 32 points.

The Still Believe lads failed to make the home advantage count when they faced King Faisal last weekend after a pulsating 1-1 draw at the Theatre of Dreams.

Dreams FC are yet to win in their last five matches, losing two and drawing three.

Ignatius Osei Fosu and his charges will hope to make a statement before their MTN FA Cup semifinal clash against Hearts of Oak next month.