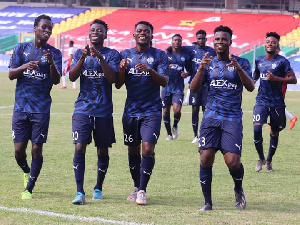 WAFA were unable to make their home advantage count as they succumbed to a defeat against Accra Lions on Wednesday afternoon.

The Academy boys suffered a 1-0 defeat to the Ghana Premier League newcomers at Sogakope in matchday 29 of the domestic top-flight.

Seidu Basit strike in the 37th minute was enough for the visitors to pick all points at stake.

Despite creating numerous scoring opportunities, both sides were unable to find the back of the net after recces with Ibrahim Tanko men walking home with all points.

Accra Lions who maintained their winning run after beating Legon Cities in their last league encounter has made a strong statement about maintaining their status in the Ghanaian top-flight with a win at away.

The win sends Accra Lions to the 10th position with 39 points after 29 matches into the season.

Meanwhile, WAFA who have produced a lot of talents for the country currently sit in the relegation zone.

They occupy 17th position with 27 points, however, with five games to end the season, the Sogakope-based club could be relegated.