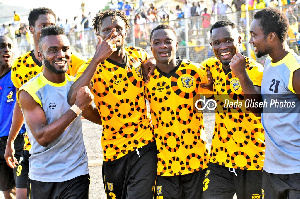 Ashantigold will be seeking to win against Bechem United in their matchday 33 of the Ghana Premier League on Sunday at the Len Clay Stadium in Obuasi.

The miners will hope to return to winning ways after suffering a 1-0 defeat to Dreams FC last weekend at away.

Coach Thomas Duah and his side have recorded one win, two draws and two defeat in their last five games.

Currently occupying 11th spot with two matches to end the season, the Obuasi-based club will hope to win to propel them to finish at a respectable position.

Yaw Annor, who has been outstanding for the miners will hope to weave his magic against the Hunters as he set sights on winning the goal king at the expense of Kotoko’s Frank Mbella.

The enterprising winger has bagged 20 goals in the league and is trailing the Cameroonian by just a goal.

Bechem United will go into the game with all seriousness knowing very well that a win for the team will help them to maintain their second spot on the league log.

The Hunters have the opportunity to back up from their slumber having won one, drawn four in their last five matches.

Bechem United are tied on points with Medeama, however, they will be seeking to secure all points at away in the bid of maintaining their second spot.