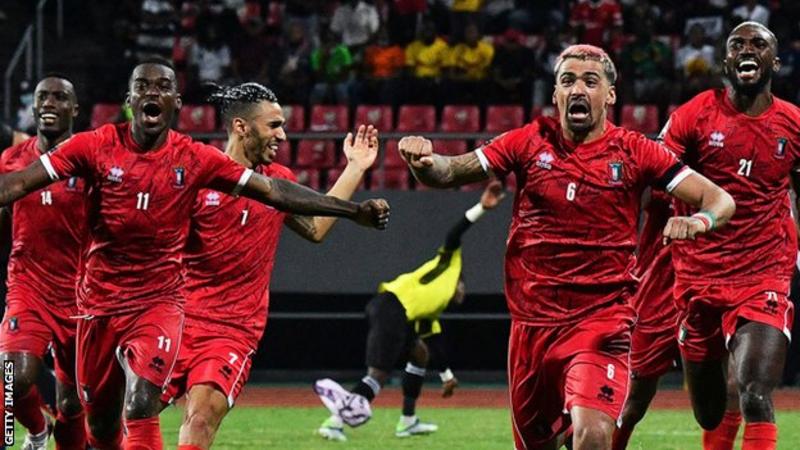 Equatorial Guinea midfielder Pablo Ganet says his side's team ethic more than makes up for the lack of big names in their squad.

The Nzalang Nacional (National Thunder) beat Mali on penalties on Wednesday to reach the quarter-finals of the Africa Cup of Nations in Cameroon.

The win saw Equatorial Guinea, who are ranked 114th in the world, continue to upset the odds after their famous 1-0 win over the defending champions Algeria in the group stages.

"We are a small country. We don't have a star - our star is the team," Ganet said after the last 16 win.

"If they respect us, ok. If they didn't respect us it is up to them, but we showed our value. We played with our heads.

"I am so happy, I don't know in English how (to say) tears of emotion. I feel really happy, but not about me, but as a team because we played as a team and it is in our power."

Coach Juan Micha added: "It's historic for us to get this far and it comes after excellent work by my players."

Equatorial Guinea dug in against Mali to secure a 0-0 draw after extra time, with Ganet, who plays for Real Murcia in the fourth tier of Spanish football, named man of the match in Limbe.

The 27-year-old admits that while the Eagles were on top for large parts of the match and enjoyed the majority of possession, his side - most of whom play in the lower leagues around Europe - never gave up.

"In the first-half, I have to be honest, I think they played better," he said.

"But step by step we got better and I think in extra time we played even better than them. I don't think they expected that and when they wanted to react it was too late. But Mali is a big team and in the future they can go far."

Equatorial Guinea, whose only two other appearances at the Nations Cup have come as tournament hosts or co-hosts, now face Senegal in the quarter-finals on Sunday.

The 20-year-old, who plays for Deportivo Alaves, had also saved a spot-kick in their final group match against Sierra Leone to clinch a spot in the last 16.

"Their performance in Cameroon has been excellent," midfielder Edjogo, who played at the 2012 and 2015 Nations Cups, told BBC Sport Africa.

"Defensively they are perfect and have only conceded one goal in four games. We have a good young keeper [who could play] for the next 10 years.

"The next match against Senegal will be just as hard - or even harder - and they must try to take advantage of their opportunities."