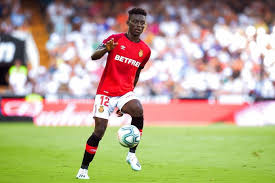 Baba has received invitation for the Black Stars' double header in the 2021 Africa Cup of Nations qualifiers against South Africa and Sao Tome and Principe respectively.

The 23-year-old is presently one of the standout midfielders in the ongoing 2019/20 Spanish top-flight.

He has made 10 appearances for Real Mallorca so far, putting up Man of the Match performances on match days.

He was handed an improved contract which will keep him at the Iberostar Stadium outfit until summer 2024.

Following his impressive displays, he has been linked with a move to Getafe CF and Atletico Madrid ahead of the January transfer window.

He played a key role in RCD Mallorca's promotion to the Spanish top flight with 25 league appearances last term.