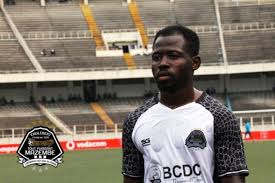 The former Hearts of Oak midfielder is among six players who will be making their debut appearance for the senior national team.

He presently plies his trade with TP Mazembe in Dr Congo and has been one of the standout players since joining them in the summer.

Jebrin will join the rest of the squad for the games against South Africa and Sao Tome on November 14 and 18 respectively.

Below is the Black Stars squad for AFCON 2021 qualifiers against South Africa & São Tomé and Príncipe: