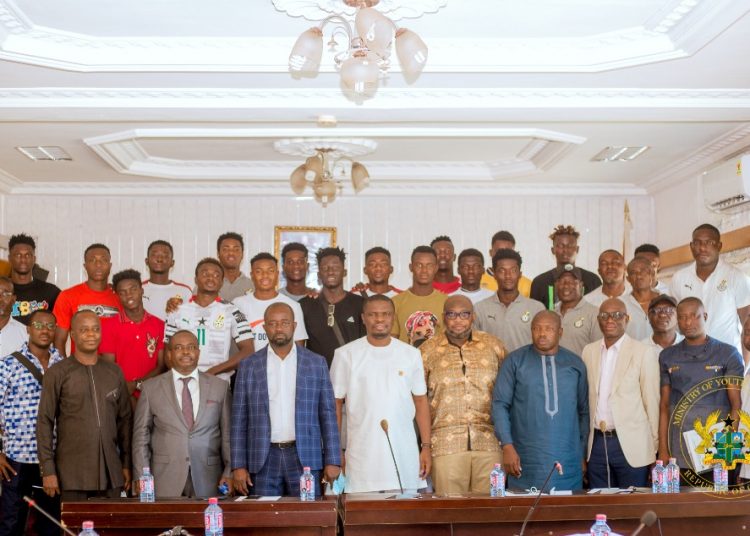 President Akufo Addo has fulfilled his promise he made to the Black Satellites, for having conquered the rest of Africa in the 2021 Under-20 Africa Cup of Nations tournament played in Mauritania.

The Minister for Youth and Sports, Mustapha Ussif presented the cedi equivalent of individual cheques worth US$5,000 to each player on behalf of the President, H.E Nana Addo Dankwa Akufo-Addo, for making the nation proud by annexing the ultimate trophy at the Under-20 AFCON tournament at the premises of the Sports Ministry on Tuesday.

According to the Minister, the President promised to give each player an amount of US$10,000 with US$5,000 to be invested by the Ghana Life Insurance Company (GLICO) Pension Scheme for ten years, adding that it has become a policy at the Ministry of Youth and Sports to provide insurance packages to all national teams whenever they receive bonuses from engaging in competitions. This idea, he said, will help to secure the future of the players by having something to fall on in times of need.

However, the President of the Ghana Football Association (GFA), Mr Kurt Okraku noted that the sacrifices made by the team had paid off today and was therefore very grateful to them.

He stressed that teamwork and good leadership won the trophy for the nation and asked them to continue in that spirit to pave the way for greater things to come.

The Chairman of the Black Satellites Management Committee, Dr Randy Abbey responded on behalf of the team by expressing extreme gratitude to the President of the country for such a gesture.

He said footballers have a shorter time to ply their trade and he was, therefore, appreciative for the investment package provided for the team adding that it will go a long way to help them in the unlikely event that they fall out of their careers.

The Chief Executive Officer of GLICO, Dr Francis Sapara-Grant made a short presentation of the insurance package to be invested for the team and mentioned a number of benefits they stand to gain from the package.

Head Coach, Abdul Karim Zito was also promised $5,000. The pledges made to the players and the coach have all been honoured.

The Black Satellites defeated the Hippos of Uganda 2-0 to win the competition.