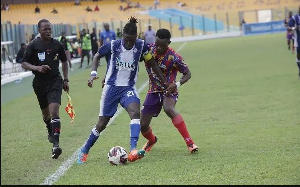 Before the game, the Phobians had suffered a back-to-back defeat to the Dade boys in the Ghana Premier League.

The visitors opened the scoring through Yussif Razak after just 8 minutes into the much-anticipated game.

The Dade boys went to recess with a one goal advantage.

After the break, the Phobians never stopped fighting as they grabbed the equalizer at the dying embers of the game to make it 1-1.

Konadu Yiadom after gifting Great Olympics a goal in the first half fought to redeem himself by restoring parity in the 89th minute.

The draw sends Great Olympics to the 3rd position whiles Hearts of Oak drops to 13th position with 1 point after two games.