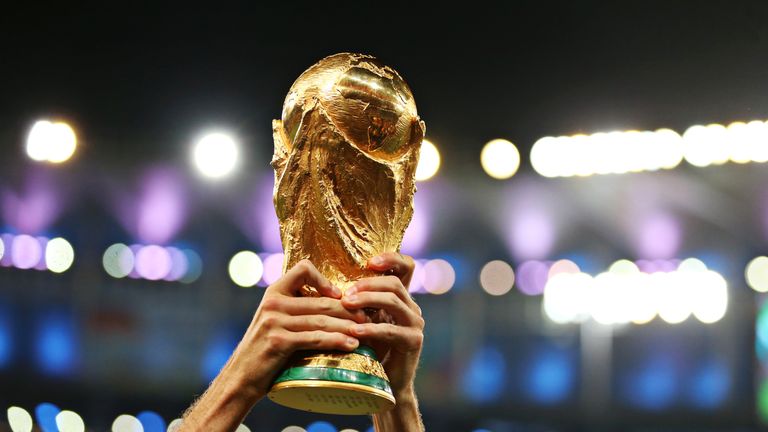 On Tuesday, Morocco and Senegal became the first teams to reach the African play-offs for next year's World Cup in Qatar, making it through with two group games left.

The two-legged play-offs in March will determine the continent's five representatives in Qatar, but which eight teams will join the Moroccans and Senegalese?

BBC Sport Africa has been taking a closer look.

Morocco, captained by Wolverhampton's Romain Saiss, and Sadio Mane's Senegal can breathe easy ahead of the last round of group matches between 11 and 16 November.

Only the eight other group winners will join them in the play-offs.

Mohamed Salah's Egypt have a four-point cushion over nearest challengers Libya after this week's back-to-back victories over their north African neighbours.

The Pharaohs know three points from their final two matches against Angola and Gabon to progress to the next stage of qualifying as they bid to reach a second consecutive World Cup.

However, surprise package Libya could still qualify if they take maximum points in matches against the same opposition and Egypt fail to win their remaining two games.

Tunisia have a three-point lead over Equatorial Guinea in Group B, and the Carthage Eagles will guarantee passage to the play-offs with an away win against the west Africans on matchday five.

As Tunisia have a far superior goal difference, Mondher Kbaier's side could still top the group even if they lose.

This month's results have left several groups finely poised, with six winner-takes-all showdowns possible in the final round of qualifying.

In Group A, Africa Cup of Nations holders Algeria, led by Manchester City's Riyad Mahrez, are ahead of Burkina Faso on goal difference alone, with the two countries meeting in north Africa after they face Djibouti and Niger respectively.

Mahrez has scored 10 goals in his last 10 internationals to help Algeria extend their unbeaten run to 31 matches.

Ivory Coast lead Cameroon by a point in Group D. If both countries win on matchday five, with the Ivorians facing Mozambique and Cameroon taking on Malawi, the Indomitable Lions will need to beat the Elephants at home to progress.

Similarly, in Group G, South Africa have a one-point advantage over Ghana with the latter, who lost 1-0 in South Africa last month, hosting Bafana Bafana in the final round.

The Black Stars travel to Ethiopia, while South Africa - chasing a first World Cup since hosting the 2010 finals - welcome Zimbabwe prior to the clash in Ghana, whose last World Cup was in 2014.

Nigeria are two points in front of Cape Verde in Group C after the Super Eagles suffered a shock home defeat against Central African Republic. Nigeria host Cape Verde in the final round of the group stage.

Mali and Uganda remain unbeaten, with the west Africans leading the Cranes by two points in Group E. Mali travel to Rwanda and Uganda welcome Kenya next month before the top two meet, with Mali the home team.

However, the Eagles were ordered to play in Morocco this moth by Caf, with home stadia deemed unfit to host qualifiers.

Meanwhile, three countries are still in the hunt for top spot in Group I. Tanzania and Benin both have seven points - with the former ahead on goals scored - while DR Congo are two points adrift of the pair.

Tanzania host DR Congo, for whom veteran striker Dieumerci Mbokani is still scoring crucial goals before an away tie in Madagascar, while Benin entertain the island nation and then travel to face the Leopards in the final round.

On the brink of an exit

Zambia (Group B), Central African Republic (Group C), Pierre-Emerick Aubameyang's Gabon (Group F) and Madagascar (Group J) can still mathematically reach the play-offs, but their respective fates are out of their hands.

The trio need to win their remaining two games and hope other results go their way, along with goal difference swinging in their favour.

Out of the running

Meanwhile, 17 teams have been eliminated from the running.

Angola and Togo, who both qualified for the 2006 World Cup, are among the countries who can no longer reach next year's finals in the Middle East.