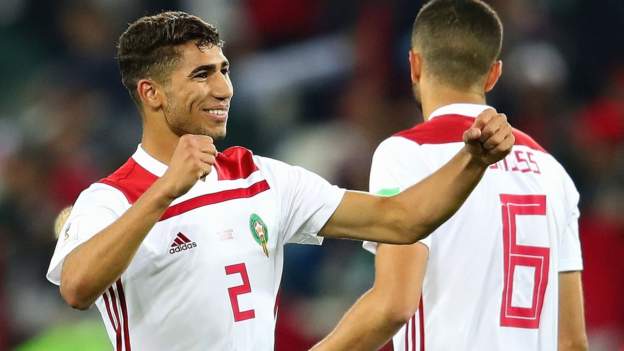 A Guinea-Bissau squad, several of whom were said to have suffered illness before the game, was beaten 5-0 in Morocco after the 'home' side profited from two unexpected advantages in Rabat.

Goals from Achraf Hakimi, Imran Louza, Olyas Chair, Ayoub El Khabi and substitute Munir El Haddadi decided a game that should have been played in Guinea-Bissau.

Owing to the latter nation's lack of a home stadium fit for international matches, the match took place in the Moroccan capital instead.

Guinea-Bissau's federation had said players had suffered 'nausea and diarrhoea' on the eve of a match which saw Morocco leapfrog their opponents at the top of Group I.

Bidding to reach back-to-back World Cups for the first time since the 1990s, the Atlas Lions now have six points from two games, with Guinea-Bissau on four.

Morocco are in the midst of playing three qualifiers in a week - all on home soil - as they not only face Guinea-Bissau again this weekend in a genuine home tie, this time in Casablanca, but also Guinea on Tuesday.

"Guinea-Bissau is not a bad team," Morocco coach Vahid Halilhodzic said after the match. "We played well, and could have scored more than five.

"Now it is time to rest. The players are tired. Then we'll prepare for the next match which means one thing for us - win."

Morocco are set to play five of their six group games on home soil, with Tuesday's clash against Guinea also moved from the latter's capital, after the coup that resulted in last month's game being postponed and the Moroccans' dramatic evacuation from Conakry.

Only the clash in Sudan next month, when Africa's qualifying groups conclude, will be away by when the pool leaders may already have booked their place in next year's play-offs.

Earlier on Wednesday, another Group I match staged in Morocco resulted in a 1-1 draw between Guinea and Sudan.

Clermont striker Mohamed Bayo broke the deadlock to put Guinea ahead in the 56th minute but Sudan hit back through Seif Teiri with 18 minutes remaining at the Grand Stade in Marrakech.

Playing their first competitive game since the coup, Guinea - who face Sudan again in Morocco this weekend - have two points from two matches while the Sudanese registered their first point at the third attempt.

The 10 group winners will progress to next March's play-offs to decide Africa's five representatives in Qatar.