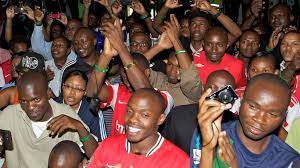 The Premier League is the world’s most-followed sports competition. Africa as a continent is passionate about its football.

An ever growing number of fans in Africa following England’s top division isn’t a surprise at all. There are an estimated 250 million Africans that watch the Premier League on a weekly basis.

Some teams are more popular than others but some have huge followings in Africa. Today we will examine the most popular English Premier League teams in Africa.

Arsenal may be going through a period of transition on the pitch under Mikel Arteta but they remain incredibly popular in Africa. The Gunners are most popular in the North and Eastern areas of Africa. The popularity is historic at this point. Many African fans remember Arsene Wenger's 'Invincible Team' of 2003-04.  Arsenal's popularity has remained high over the years since then. A number of African stars have played with the club as well.

Lauren and Kolo Toure were both instrumental during the unbeaten season. Emmanuel Adebayor helped continue African interest in the club during his three-year stay. The Togo national left the Gunners in controversial fashion, signing with rivals Manchester City. One top Ghanaian star playing at Arsenal this season is Thomas Partey.

Manchester United is one of the most popular clubs worldwide. The Red Devils were the center of the first unofficial Premier League fan club in South Africa. There have long been links between Manchester and South Africa. The Red Devils went on a number of pre-season tours to the country. One of the most famous South African players also spent the majority of his career at Old Trafford. Quinton Fortune was underrated as a player for the Red Devils during his seven-year tenure. As a fringe player, Fortune was only part of the Premier League winners' medal. This despite the club winning three titles during his stay. United’s popularity remains high in Africa to this day. Millions of fans tuning in to watch games throughout the Premier League season. United are also incredibly popular with online soccer betting sites.

Like Manchester, Liverpool enjoys global popularity. However, over recent seasons they have gained more popularity in Africa. This is partly due to the number of players from the continent that play for the Anfield giants.

Joel Matip plays at the heart of their defense, and represented Cameroon before retiring from the international game. Naby Keita also is also prominent in Africa for his play Guinea. Two of Liverpool’s star forwards are also African. Sadio Mane has been a revelation for the club since signing for Liverpool. He is regarded as one of the best wingers in world football.

Liverpool can also call upon Mohamed Salah, who many consider to be among the world’s best players. The Egyptian is incredibly popular in his home country. The popularity of Liverpool has increased following his arrival at Anfield from Roma.

Chelsea have grown into one of the biggest clubs in England following their take over early in the 2000s. The popularity of the club in Africa was able to reach new heights following the signings that they made.

Didier Drogba from Côte D'Ivoire, signed with Chelsea from Marseille for a record fee. The striker left a lasting legacy at Stamford Bridge. During his tenure the club won four Premier League titles, four FA Cups, and the Champions League. Fellow African players have also played their part in success for Chelsea on the pitch. Samuel Eto’o, Michael Essien, and John Obi Mikel are some of the most notable names.

The long success of African players at Stamford Bridge has continued in recent years. Chelsea recently signed Senegalese goalkeeper Edouard Mendy in 2020. The 29-year-old is considered to be one of the best goalkeepers in the world. He played an important role as the Blues won the Champions League in 2020-21.

One of the fastest-growing clubs in Africa has been Manchester City. Very few fans would have heard about the club before their takeover in 2008. However, since then, they have had deeper pockets and have been able to build title-winning sides. Some of their most important players throughout their modern history have been African players, including Yaya Toure.  One of the greatest players ever was Yaya Toure, who signed for the club from Barcelona in 2010. During his eight-year stay with the club, he won the Premier League title on three occasions, and the FA Cup and EFL Cup. Further African success has followed with Riyad Mahrez, as the Algerian has won two Premier League titles and three EFL Cups in three years with the club.