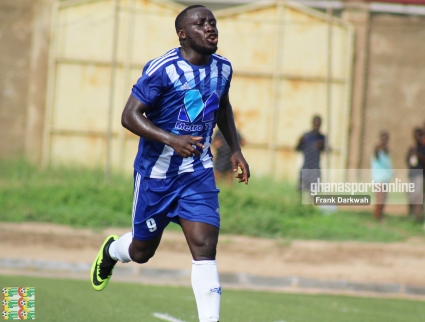 Former Great Olympics striker Abel Manomey has disclosed why he opted to join Dreams FC in the Ghana Premier League.

Manomey was linked with a move to several clubs but penned a two-year deal with the 'Still Believe' Lads after successful negotiations earlier last week.

Speaking to Citisports in an interview, he revealed that the approach by the management of the club and a fresh challenge were the reasons why he joined Dream FC.

"Well, I think the first one was the approach because maybe they felt that I could be important to the team at this time of the season, he told citisports.

"What they put on the table was also a factor," added the forward.

"And then I had to also do consultations because I had already spoken to lots of clubs, I had a verbal agreement with Olympics.

"But after consultations, everyone agreed that I needed a fresh environment, a fresh challenge and that was what changes everything."

Manomey scored 10 goals in 10 matches to grab the headlines of the 2020 GUSA games by becoming the highest scorer for men’s football when he featured for the University of Education, Winneba.

He is expected to play a key role at Dreams FC as they lie 13th on the league table with 16 points, just one point above the relegation zone.