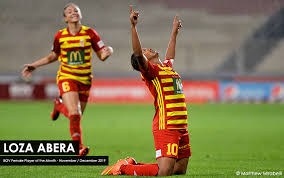 Ethiopian Loza Abera had an unforgettable debut season in Malta last year, scoring 30 goals in 14 league matches and a further three in the Super Cup final for her club Birkirkara, champions of the Maltese Women’s First Division League.

In her second stint in European football, the 22-year old hoisted herself to the top of the world, getting noticed by all and sundry.

“It was a very good season in Malta and I really enjoyed my football there. It was successful because I scored goals as is required of a striker and I feel I grew one step in football. The experience there was amazing and I can’t equate it to anything,” Abera told CAFOnline.com

It was another massive step for Abera who grew up dreaming of becoming a footballer from her home town of Durame, South Eastern of Ethiopia.

In 2012, at the age of 14, she joined her first professional football team. She signed for Hawassa City, a team situated about 120-km away from her home in Durame. Her talent was unquestionable as in both seasons she played at Hawassa, she was the team’s top scorer.

With impressive performances, it was only a matter of time before her talent was spotted and a bigger club came in calling. Under the invitation of coach Asrat Abate, Abera moved to the now defunct Dedebit Ladies where she continued to flourish.

She led the team to the league title in all the four years she was there and finished as the league’s top scorer in each of those four seasons.

In 2018, she brought her stint at Dedebit to an end for a brief stint in Sweden with second tier side Kungsbacka DFF before returning home to sign with Adama City midway through the 2018 season.

Her signing proved to be a masterstroke as she aided Adama to their first ever Ethiopian Women’s Premier League title, scoring 18 goals and finishing as the top scorer despite joining midway through the campaign.