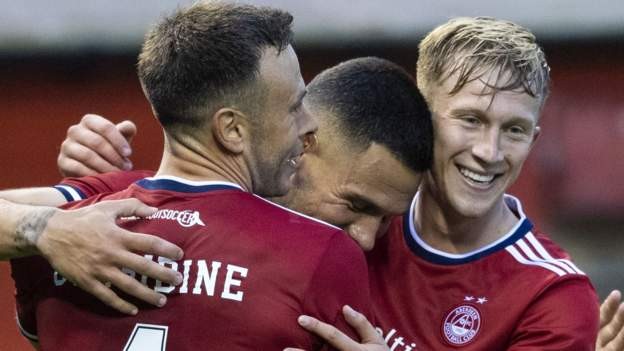 Manager Stephen Glass says Aberdeen "won't get carried away" despite almost sealing their place in the next round of the Europa Conference League with a dominant win over Hacken.

Lewis Ferguson's brace and goals from Andy Considine, Christian Ramirez and Connor McLennan earned an fine win in front of 5,655 fans at Pittodrie.

And should they emerge unscathed from the second leg in Gothenburg, Aberdeen will face Austria Vienna or Breidablik in the third qualifying round, with those sides drawing 1-1 in Vienna.

"I could sense that excitement," said Glass. "I don't think you can stand here and say you're going to score five goals. I'm delighted the players get the reward for the work they've done the last five weeks.

"We believe we are doing the right things. The team showed that against a very good team. We shouldn't underestimate how good they [Hacken] were tonight. We won't get carried away. We have to continue this."

Aberdeen return to Gothenburg next Thursday for the second leg. It is a city with fond memories for the club's fans after their 1983 Cup Winners' Cup win there, but this tie was one that seemed full of foreboding.

The Swedes are 11 games into their season and initially looked more energetic than their hosts, who have only played a couple of pre-season friendlies.

But Glass' side grew into the match. Ferguson fired high and wide, before Considine stepped up to meet Calvin Ramsay's corner before celebrating with a section of the 5,655 returning fans at Pittodrie.

After that, Aberdeen were relentless. Ferguson's second attempt of the game struck the woodwork but he would not be denied a third time. Ryan Hedges was fouled, and Ferguson went low into the net with the penalty.

Funso Ojo had two chances before the second goal and Ramirez should have netted with a free-header. Glass' team could have been three or four goals ahead at half-time, taking full control of the tie.

Hacken had dropped out of the game and Aberdeen made sure to make their momentum count. Ferguson looked like he might have almost put the tie beyond doubt by finding space 25 yards from goal and - under no pressure - blasting low into the net.

It was no more than Aberdeen deserved but the Swedes pulled one back, Jeremejeff doing well to cut inside and beat Joe Lewis. But with the away goal rule scrapped this season, it appears unlikely to have any meaningful impact on the tie.

Ramirez and McLennan all but put the contest beyond Hacken in the late stages. The American striker netted a tap-in for his first Aberdeen goal, then McLennan's stoppage-time strike capped off a terrific performance.

Man of the match - Lewis Ferguson Two goals and an energetic performance from Ferguson showed his quality.What did we learn?

Only Dundee United, Hamilton and Ross County scored fewer goals than Aberdeen in last season's Premiership. Whatever Glass has been working on this pre-season has paid dividends.

Aberdeen could have scored another couple as they blew their visitors away. This was tipped to be a tricky test for Glass' team, but they looked levels apart. Emmanuel-Thomas and Ramirez led the line extremely well.

Aberdeen travel to Gothenburg for next Thursday's second leg (17:30 BST) before starting their Premiership campaign against United next Sunday (15:00).