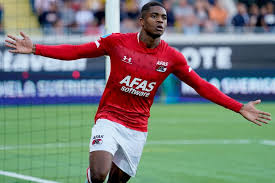 AC Milan have expressed interest in signing Ghana and AZ Alkmaar youngster Myron Boadu ahead of the January transfer window, Footballghana.com can report.

The Rossoneri are among the teams scouting Boadu as the owners Elliott Management have so far deployed a recruitment strategy focused on buying young players with high potential and developing them in order to record capital gains on the balance sheet.

The Ghanaian has had an impressive start to the 2019/20 season, scoring six goals and providing three assists in 10 Eredivisie matches as well as four goals in nine Europa League appearances.

According to Calciomercato.com, Milan’s scouts are now taking notice of the 18-year-old striker, who came through the academy at AZ.

He has already made his debut for the Netherlands U-21 national side, netting twice on his debut against