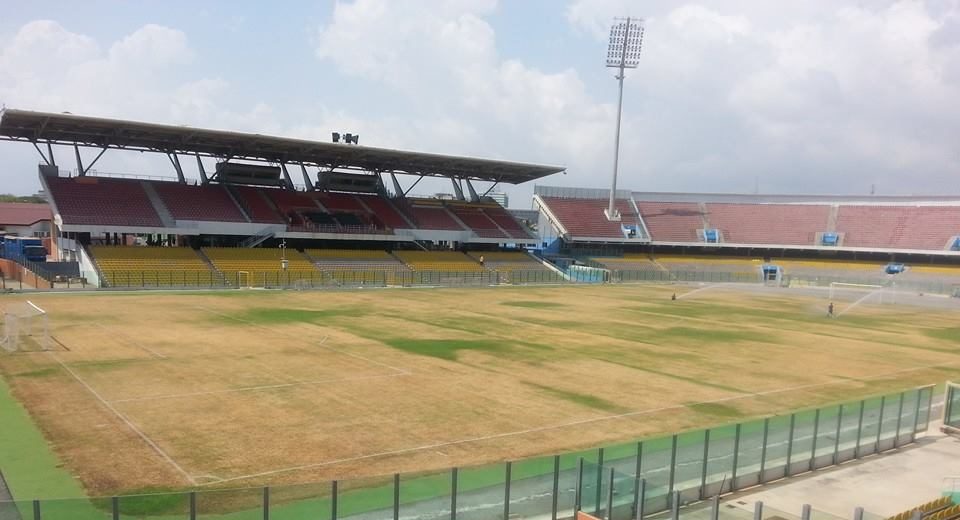 The 40,000-seater Ohene Djan Sports Stadium in Accra is fast deteriorating and could serve as a death trap to patrons of the facility painstaking investigations by mynewsgh.com have revealed.

A looming disaster awaits the nation if managers of the facility and government fail to take immediate steps to address the architectural challenges that have saddled the national stadium which received a facelift in 2007 ahead of the Africa Cup of Nations (AFCON) hosted by Ghana in 2008.

A visit to the facility revealed that metals used in erecting sections of the stands including the stretch towards Osu are corroding as managers look on helpless.

The situation is not any different from the playing pitch as the green grass is giving way to the unfavourable weather with no record of when it was last watered to enhance any growth.

They pitch isn't the best and lacks consistent watering due to lack of water available with visible broken seats at the stands, malfunctioning of the scoreboard and general structural defects creating doubts about the lifespan of the facility

In the wake of these lapses, the National Sports council claims they is handicapped financially and is not able to take very good care of the facility coupled with low patronage of fans and spectators at the stadium to generate funds to finance its operations.

Cleaners from Zoomlion in charge of cleaning the facility it was also uncovered have their salaries delaying in the wake of the non availability of modern cleaning equipments for a facility that is expected to meet international standards.

At the time of our visit, there were only 5 cleaners on sight cleaning the stands which was also lazily done because the cleaners revealed to mynewsgh.com on strict anonymity that their salaries have been on arrears for several months compelling some of them to willingly resign.

"We were more than 30 working at the stadium, but because of the delays in the payment of salaries, our colleagues kept resigning leaving the 5 of us to manage the facility. When we come here, we do what we can and also go home", they revealed

The tinted track at the stadium is spoilt but a source from sports council said the replacement of the track rests with the government and not the sports council. He revealed that sports council has to replace broken seats, clean the place and see to restoring the quality of pitch but all this depends on money which is currently unavailable.