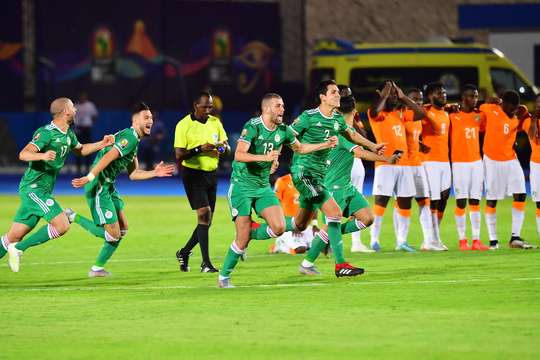 The Desert Foxes of Algeria has beaten the Elephants of Cote d’Ivoire 4-3 on penalties today to secure progression into the semi-finals of the 2019 Africa Cup of Nations (AFCON) tournament.

The two sides faced off in a quarterfinal match at the Suez Stadium today but had nothing to separate them at the end of the 90 minutes. A one all draw meant they had to be separated by the penalty shootout which Algeria managed to win.

Following some numerous sequences of end to end action in the early minutes of the first half, Manchester City winger Riyad Mahrez found himself in a good position to open the scoring for his side but failed to find the required target.

Around the 20th minute mark, Sofiane Feghouli showed good technique in the attacking third and fired his effort from the edge of the 18-yard box into the back of the net to give Algeria the lead.

The Elephants pushed for an equalizer to bring them level but were always stopped in their tracks by their opponent as the referee whistled for the end of the half.

Just three minutes into the second half, the Desert Foxes were awarded a penalty kick after a review from the Video Assistant Referee (VAR). Striker Baghdad Bounedjah stepped up to take the kick but disappointingly smashed the ball against the crossbar.

That penalty miss gave Cote d’Ivoire hope of getting something out of the match and they continued to push the opposition in search of that vita equalizer. Algeria who continued to be wasteful in front of goal was later punished on the 62nd minute. Crystal Palace winger Wilfred Zaha assisted striker Jonathan Kodjia whose unconvincing shot somehow found its way into the back of the net.

Despite some exciting and attacking play from the Desert Foxes, they could not edge the Elephants and had to settle for a draw at the end of the 90 minutes.

The game was forced into extra time but none of the sides could get a goal at the end of the two halves. Now faced with the lottery of the penalty shootout, Algeria reigned supreme and came out 4-3 winners at the end of it all.