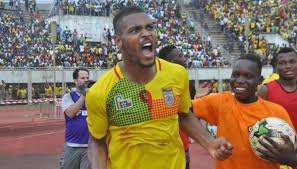 Huddersfield attacker, Steve Mounié was on hand to score a hat-trick for Benin on Tuesday, June 18, 2019, as they defeated Mauritania in a pre-tournament friendly in Marrakech, Morocco, ahead of the 2019 Africa Cup of Nations (AFCON).

The prestigious tournament which is being hosted by Egypt is just 3 days away from its opening match. Teams in the past weeks have intensified their training regimen whiles engaging in as many friendly matches to get themselves in shape for what will be a difficult cup of nations.

Benin, who has been pitted in Group F of this year’s AFCON is no different and has been preparing as well. They played Mauritania who will also be making a representation in Egypt earlier today to wrap up their training camp before moving to Egypt.

Steve Mounié opened the scoring for the Squirrels on the 38th minute after connecting well to a brilliantly taken free-kick by Soukou. Two minutes after the break, Mauritania drew level through El Hacen El Id after they were awarded a penalty.

Red-hot Mounié restored the lead for his side in the 62nd and went on to complete his hat-trick with a fine goal to complement a well-worked team move.

Having wrapped up their friendly matches, the team is now expected to arrive in Egypt on Thursday, June 20, 2019, in anticipation of the start of the continental showdown.

They will open their group against the Black Stars of Ghana 25th June 2019 in Ismailia.