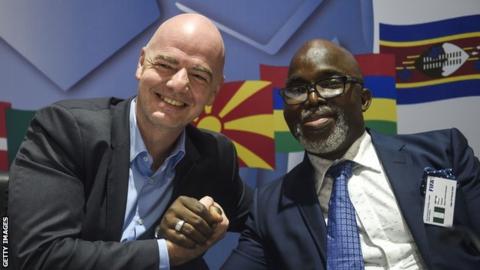 Africa "will definitely support" expanding the 2022 World Cup in Qatar to 48 teams, says the Confederation of African Football (Caf) vice-president.

Fifa's Council is meeting in Miami on Thursday and Friday when it will discuss the possible expansion.

With Africa's World Cup allocation set to double, the views of Nigeria's Amaju Pinnick may come as little surprise.

"Caf will definitely support the vision of (Fifa president) Gianni Infantino if he wants this," he told BBC Sport.

"Why wait until 2026 if we can achieve it now? If you do it now, there will be more money and more participating teams.

"In Africa, we are going to have another 4.5 (places), which makes more sense to us - rather than just going with five nations. That's why Africa will always support Infantino."

Because of its small geographical size, Qatar would need the support of regional co-hosts to stage a 48-team finals.

Earlier this week, the Associated Press reported that a leaked Fifa feasibility study into the prospect of expanding the 2022 World Cup could work if at least one of Qatar's neighbours was used as an additional host.

Stadiums in Bahrain, Kuwait, Oman, Saudi Arabia and the United Arab Emirates have been identified as suitable yet only two of these countries would appear feasible at present - Kuwait and Oman.

Bahrain, Saudi Arabia and the UAE severed diplomatic ties with Qatar in 2017, accusing the country of supporting terrorism - an accusation it denies.

"The involvement of additional neighbouring host countries would require certain conditions to be met, in particular, the consent of the relevant authorities in the main host country, Qatar," the Fifa report stated, according to AP.

Qatari officials are set to meet Fifa leaders on Friday when the Fifa Council will discuss a feasibility study organised by the world governing body's task force.

A final decision on the possible expansion - which would come ahead of a pre-existing decision to have 48 teams in the 2026 World Cup in Canada, Mexico and the United States - is expected to be taken at the Fifa Congress in June.

"Make it like a Middle Eastern World Cup, and what does that do? It heals the wounds of politics. Football heals wounds where other diplomatic moves fail, so they should capitalise on that," added Pinnick.

"Most (member associations) want it - I've done my own research and spoken to a lot of colleagues - not just in Africa, but in Concacaf (Central American, Caribbean and North American region), in Conmebol (South America), some even in Europe."

However, Europe is expected to challenge the prospect of 16 more teams and an extra 16 games - given the 2022 finals are already forcing the continent's leagues to rearrange their competitions.

This is because the tournament will take place in the middle of the European season, having been moved to November-December from its traditional June-July slot.

Meanwhile, the global footballers' union FifPro has called for a 'comprehensive review of the match calendar' and a 'minimum rest period between matches (of) 72 hours' after the feasibility study found the Qatar finals could still be played in their original time frame.

This would mean 80 matches being played in the same 28-day window between 21 November and 18 December.

With Caf President Ahmad unable to attend the Fifa Council meeting after being denied entry to the United States, Pinnick's role as Caf's first vice-president means he will head the continent's presence in Miami.

Ahmad was denied a visa to the United States although the reasons behind this decision are still unclear.