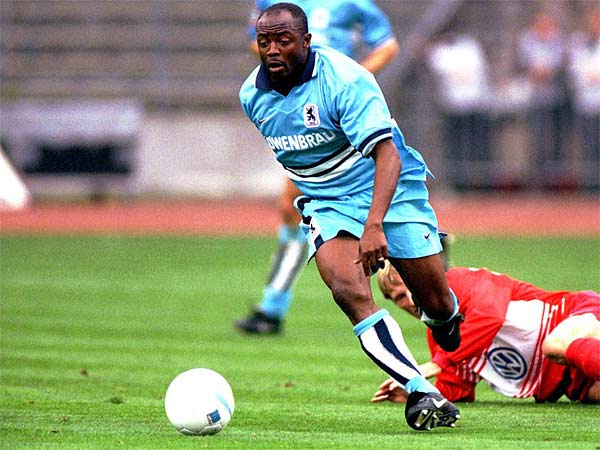 Which of the Alcon qualifiers featured in the German top-flight during their playing career?

The Bundesliga will become the first major European league to return to action this weekend following the coronavirus pandemic, with Germany allowing football to return two months after it was suspended.

The German top flight is home to some of the finest African footballers in the world game, with Achraf Hakimi, Ramy Bensebaini, and Christopher Nkunku all still in the title picture.

Over the years, various African greats have played in the Bundesliga, and several of the players who qualified for the ongoing African Legends Cup of Nations left an indelible mark in German football.

The most successful African player in the history of the Bundesliga, Kuffour won a whopping six German titles with Bayern Munich after signing in 1993 after a brief spell with Torino.

At this point, he had had little exposure to the European game, and had to endure the hardship of Bayern’s last-gasp Champions League final defeat by Manchester United in 1999, denying FC Hollywood a famous double.

The three-time Ghanaian Footballer of the Year ended his time at Bayern with four German Cups, two League Cups, and the 2001 International Cup to accompany his 2001 UCL triumph.

While Okocha enjoyed nothing like Kuffour’s success in Germany, he is responsible for one of the Bundesliga’s greatest goals after scoring a delicious solo effort against Oliver Kahn’s Karlsruher SC in 1993.

In recent years, the Germany great revealed that he still hasn’t recovered from the Nigeria playmaker’s magnificent effort, which was voted as the 1993 Goal of the Year.

Okocha departed Eintracht Frankfurt for bigger and better things in 1996, first signing for Fenerbahce and then moving on to Paris Saint-Germain.

A former Bundesliga Player of the Year, Aubameyang never won the Bundesliga title, but did knock Robert Lewandowski off the top scorer charts in memorable fashion in 2017.

While some may argue he should have left Dortmund earlier, and that he ought to have been more ambitious than accepting a move to Arsenal, he’s quickly established himself as one of the Premier League’s finest strikers.

The reigning Golden Boot winner has already struck 49 goals in 75 outings for the Gunners, but a lack of major silverware definitely cost him in the African Legends Cup of Nations.

While Abedi Pele’s best remembered for his glorious spell with Olympique de Marseille at the start of the 1990s, when he won both the French title and the Champions League, he also spent time in Germany later in his career.

The Ghana great signed for 1860 Munich in 1996 and spent two seasons in Bavaria, helping Die Lowen to two mid-table positions.

By the time he left the Bundesliga, he was in his mid-30s and moved to Abu Dhabi for one final goal-laden spell to round off a glittering career.