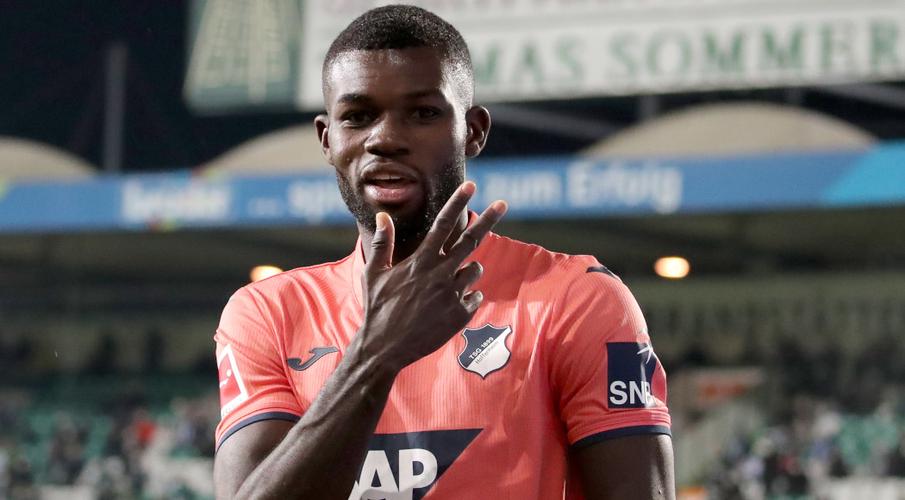 Togo international Ihlas Bebou scored a hat-trick for fifth-placed Hoffenheim at the weekend in a 6-3 Bundesliga triumph at bottom club Greuther Fuerth.

It was the first German league treble for the 27-year-old winger, who had spells with Fortuna Dusseldorf and Hannover before joining his current club in 2019 on a three-year contract.

Egyptian Mohamed Salah, often the African star of the weekend, had to settle for an assist as Premier League title contenders Liverpool whipped Southampton 4-0 at Anfield.

Here, AFP Sport highlights Africans who starred in the major European leagues at the weekend.

Salah was not on the scoresheet for Liverpool in their 4-0 rout of Southampton but provided a brilliant cross for fellow forward Diogo Jota's second goal. The Egyptian's scoring rate has slowed in recent weeks after a sensational start to the season but the 29-year-old has still racked up 17 goals for the club since August.

Nigeria forward Dennis is making waves despite the struggles of his Watford side, who are languishing in 16th spot in the Premier League after a 4-2 defeat at snowy Leicester. The 24-year-old scored the second goal at the King Power Stadium and became only the sixth player in Premier League history to reach both five goals and five assists in 12 or fewer games

The Nigerian striker's goal against Barcelona was not enough to prevent Villarreal losing 3-1 at home to Barcelona in LaLiga. Villarreal looked likely to take a point after Chukwueze nipped in ahead of Oscar Mingueza and poked into the corner in the 76th minute for his second goal of the season. But Barca hit back twice late on through Memphis Depay and a Philippe Coutinho penalty to claim victory.

Senegal captain Koulibaly played a key role in Napoli's 4-0 crushing of Lazio, patrolling the backline and taking part in some incredible spells of possession as Luciano Spalletti's side moved three points clear at the top of Serie A. It was the perfect performance on the night in which Naples paid tribute to its adopted son Diego Maradona.

Bebou cancelled Jamie Leweling's opener for bottom club Fuerth and added a second as Hoffenheim took control of the game in the second half. He completed his hat-trick through an elegant chipped finish with 10 minutes remaining.

Nigeria striker Awoniyi helped his side to a second-half equaliser before an agonising injury-time goal saw them stumble to a 2-1 defeat at Eintracht Frankfurt. Awoniyi was fouled by Evan N'Dicka on the hour mark, allowing Max Kruse to score from the spot and cancel out Djibril Sow's first-half opener. But N'Dicka had the last laugh, heading the winner seconds before the final whistle.

Tunisia midfielder Skhiri made his first Bundesliga start in almost two months as his side cruised to a 4-1 derby win over Borussia Moenchengladbach. Having missed four games in a row with a knee injury, Skhiri made a cameo appearance in last week's draw with Mainz before returning to the starting eleven against Gladbach.

The Ivorian produced a wonder strike in stoppage time to give Reims a 1-0 win at home to Clermont. The left-back unleashed a thunderous drive from 20 metres into the top corner for his first goal of the season to push his team clear of the relegation places.

The Democratic Republic of Congo international notched his second goal of the campaign in a 2-2 draw with Angers. Kakuta, who scored a career-best 11 times in Ligue 1 last term, fired in a cross from Mali defender Massadio Haidara just after halftime to cancel out the opener from Morocco's Sofiane Boufal.