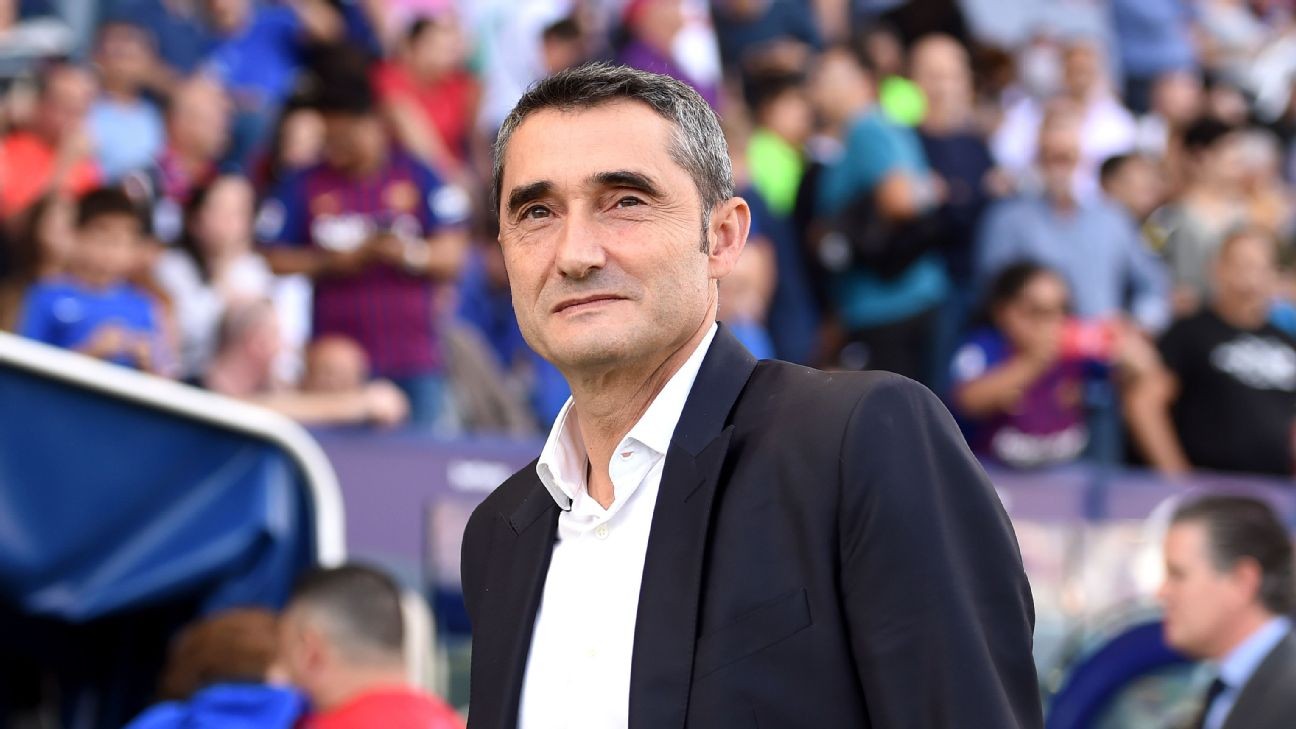 Ernesto Valverde wore a beard and a smile and was back where he belonged, among friends.

On his last day at work at Barcelona, photographers had caught him on camera driving out of their Sant Joan Despi training ground, the club's crest reflected on the windscreen, upside down and distorted. From behind the wheel he grinned and waved, a portrait that appeared in every paper. That afternoon he got on his bike and rode, taking his mind elsewhere with him. He hadn't officially been sacked yet, but he knew he would be -- his agent was just finalising his settlement.

He returned briefly the following morning to say goodbye and then he wasn't seen again. Until now.

Exactly a month later, Valverde walked into San Mames, the morning after Athletic Bilbao had beaten Granada 1-0 here and a week after Athletic had beaten Barcelona. Athletic are no longer his responsibility either -- Gaizka Garitano is the coach now and it has been three years since Valverde left, top of the table -- but it is still his place.

"Everywhere leaves a mark on you," he said, but maybe nowhere quite like this. "This place is different," he said, looking out towards the empty and quiet stands. "And opponents know that too." He has seen it from both sides. Quique Setien's defeat was "identical" to the one he suffered in August, he said.

Valverde was back at San Mames to receive an award at the Bilbao International Football Summit. He had been invited before Barcelona replaced him, and while it has been only a month since his dismissal, a lot has happened since.

First and foremost, the sense of chaos back in Catalonia has only accelerated, and he won't have failed to notice that even as he walks away from the fire. Nor was his absence irrelevant in those issues: Eric Abidal's words and Lionel Messi's words back, happened in the context of his departure, remember. Some in Barcelona always saw him as a man who quietly kept the lid on their problems, but that plug had been pulled.

While it would be easy to imagine him laughing at it all, thinking he told them so, there is not the slightest hint of that. "I don't feel unfairly treated," he said. "I don't think like that. I prefer to turn the page and look forward, not back. I feel incredibly lucky to have coached Barcelona."

- Transfer Grades: All the big moves rated
- When does the transfer window re-open?

His return, publicly at least, was not in Barcelona but in Bilbao and there was warmth when he walked in and many a familiar face. It was reciprocated too: he was relaxed, at ease, in no hurry. He has done other things and there is more to do. Mostly he has taken a step back.

There is always a risk in playing amateur psychologist -- and he never lost his calm, even as others did when he was at Barcelona -- so it is a leap to see some sea change. That said, it seemed as if he were better for it, free. Expressed by that thing on his face, he might wonder why he went on this long there; he already had, in fact, even before it came to an end.

Even when he was winning, Ernesto Valverde just never seemed to be appreciated during his time at Camp Nou.

Many people had already read liberation, a weight removed, from that photo from behind the wheel of course. But this was a different environment and it felt different, as if he had come home. It was all so natural, so him. Valverde played here for six years and coached here for six years, too.

While he was at Barcelona, he was once asked who the best team in Europe had been over the past decade. He couldn't answer Madrid, not there, so he said: "I don't know, Athletic?" Valverde's family supports Athletic and so do most of his friends. "Maybe that does make it mean more when you win and you lose," he conceded. "There's also a special working environment: positive, comforting for the people there."

When it was suggested to him that the sweetest moment of his career was Athletic's 5-1 Supercopa win over Barcelona in 2015, he replied; "Well, when you stop to think, when you look back and you see what it meant to people, then yeah, it was a lot. To think, bloody hell, we went such a long time without winning anything and then [that happens] ... all the people closest to me are Athletic [supporters]."

Not that it means he'll be back, at least with the first team. He may not even be back at all. Asked about returning to Athletic by the event's host, Axel Torres, he insisted: "I turned 56 a few days ago. I was born in the 1960s. There are good coaches here now. Gaizka Garitano is in charge, born in the 1970s. There are coaches born in the 1980s, there are people like Joseba Etxeberria and Andoni Iraola. I think it's their moment. Athletic's future is theirs."

"Yeah, but if those were the happiest times ..." he said with a grin. "It's nice to have good memories."

What's next then? Valverde protested that he only left not long ago. He had always planned to stop for a bit after Barcelona. He'll watch some football, talk to some coaches, and then see. There will be pressures to get back to work, calls, offers.

Logic suggests leaving Spain, he conceded. "I like weird things. People say, 'Oh, the Premier League.' But, I don't know, I'd like to go to Australia. I like an unusual adventure, strange places." Andres Iniesta has been in Japan. "And that's a good place to take photos," Valverde said. He'll do that too. His photography has got rusty, his "eye" lost, but there is time to put that right.

His rebuttals weren't just for public consumption. Nor were they to throw people off. This was genuine Valverde. No rush, no rant, no search for vindication, no decision made or path mapped out. There is no sudden urge to return or desire for profile or to be the protagonist. No need to be in the front line. Better behind the camera than in the front of it, perhaps.

Javier Irureta listened quietly, smiling: a league title-winning manager with Deportivo La Coruna, he is now chief of youth football at Athletic. There's time to think, to let things happen, and see. He says the talk of him as a man with endless interests outside the game is exaggerated, but it's not invented. There will be the pull, people pushing, but that doesn't mean the pressure will necessarily be strong enough.

"There are parts of our job that you have to accept. That's the way it is, [to use] a typical phrase," Valverde said. Which doesn't mean liking it, or at least not all of it. And that, of course, is part of the point. Beyond the windows, the San Mames pitch stretched out. "We like that green part. And the part that's people supporting you, the fans," he added. "We know that this is a huge show business and we're [just] one part of that.

"There are more and more debates, interest, coverage sales." News conferences that are fuller when things are falling apart than when you're winning. "We like that [green] part," he said. "Those of us who were players like playing on the street, a pitch, put a couple of jumpers down, go round someone, play a one-two. And we're lucky that people like it. If not, if it was badminton they liked, it would be Carolina Marin sitting here."

Instead it was Valverde, the former Barcelona manager. And who's complaining? "Not me," he said.