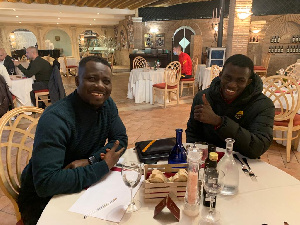 Felix Afena Gyan’s agent Oliver Arthur has eulogized the exceptional qualities of the AS Roma youngster after hitting the ground running in Italy.

The 18-year-old joined AS Roma early this year and featured for the U-19 side where he impressed and earned himself a spot in the senior team under Jose Mourinho.

He has made three appearances in the Serie A scoring two goals in the process.

Afena Gyan dominated the headlines after climbing off the bench to hit a brace against Genoa.

In an interview with Angel TV, the FIFA agent said he is shocked about the progress of the Ghanaian youngster at Roma.

“So, Roma signs him in the first team as we know, they don’t think player coming directly from Africa can make it in the first team. So, you will go to the second team and then you learn one or two things”

“Afena went there and two months of learning from the second team they informed me his program has changed and so, he will train with the first team and play matches with the second team”

“It’s like only three months with the second team and then he is to the first team, so his own is exceptional, its never happened and his progress has shocked us” he said.