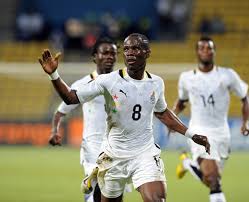 Ghana midfielder Emmanuel Agyemang-Badu says his move to Turkish side Bursaspor was not money-driven as been speculated.

Badu last week joined the Turkish side on a season long loan from Italian side Udinese.

Before the move, many  predicted he was heading to English Championship side Birmingham City after talks with manager Harry Redknapp.

But with that failing to go through, there are talks that Badu decided to move to Turkey because of money.

“I don’t think I came to Turkey because of money. I want to play football and I will get it in a competitive Turkish league,” Agyemang-Badu said.

“The offer I got for Birmingham was very great, it was very difficult to reject it but I needed to taste the Turkish league.”

The Fifa U-20 World Cup winner revealed influences from his colleague African players in the Turkish league contributed to his decision.

“I spoke with Jerry Akaminko, John Boye, Adebayor and Asamoah Gyan before our friendly with Kayserispor.

“There were great reviews and I want such challenges. It is not about money,” Agyemang-Badu insisted.