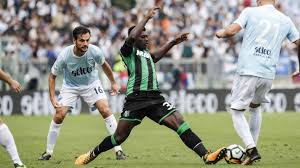 When Ghana assemble in mid-October for the next instalment of 2019 Africa Cup of Nations qualifiers, one player may well find himself central to the big decisions that coach Kwesi Appiah has to make.

Alfred Duncan has not featured for the Black Stars for a year, yet his club career continues to go from strength to strength, and he's started the Serie A season strongly with Sassuolo.

His consistency, prowess with his left foot, and presence in midfield have won him many admirers in Italy and will have prompted increased expectations among supporters back home.

"It hurts that I have been ignored because everyone wants to play international football," he told KweséESPN.

"It is a compliment to be considered good enough for your country, and all I can personally do is to make my case by playing well at club level."

Duncan has certainly started the season strongly; he's been a regular for fifth-placed Sassuolo in a manner that star man Thomas Partey has not managed at Atletico Madrid.

He's also eclipsed another Ghanaian in Serie A, Afriyie Acquah, who started the Black Stars' last match in Kenya

It is a start to the season that has Duncan, the former Inter Milan player, buzzing with a lot of confidence.

"Normally, in the past, I play two good games and then my level drops the next," he added.

"This time, the level has been consistent, and everyday I feel better about myself. I get more minutes on the pitch, which works magic for any player."

He arrived at Inter Milan as a teenager from Ghana in 2012 and spent time on loan at Livorno before moving permanently to Sampdoria.

He subsequently signed for Sassuolo, initially on loan, in 2015.

"Going out on loan gave me an unbelievable experience," the 25-year-old continued. "At Inter, I benefitted from training and playing with some of the biggest names and internationals from all over the world.

Then, when I went on loan, I learnt to graft and work extremely hard. It has shaped me well at Sassuolo so far."

Duncan has learnt a great deal from living in Italy too.

"I have acquired a lot of experience from being here. I am better equipped at dealing with people, I think I have also grown as a footballer because the football here is so good, you are forced to think on your feet."

Confidence is clearly flowing through Duncan's veins in light of his strong start to the season, and as well as securing a return to the Black Stars fold, he's also dreaming of a boost in Sassuolo's standing.

"By the end of the season, I want to have helped Sassuolo qualify for the Champions League and prove to everyone just how good I am.

"I just want to improve in every way, as much as I can."