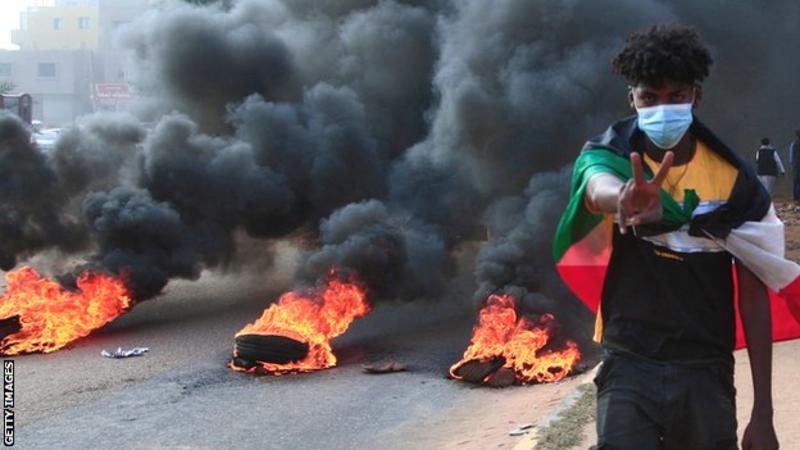 Algeria's women's national side say they are "powerless" in a Khartoum hotel as they wait to leave Sudan following Monday's coup in the country.

The Algerians were scheduled to play a qualifier for next year's Women's Africa Cup of Nations in Omdurman on Tuesday.

However, the game was postponed after Sudan's military dissolved civilian rule, arrested political leaders, and declared a state of emergency.

The Confederation of African Football (Caf) confirmed the match would be rescheduled "in view of the current political situation".

"Caf is closely monitoring the situation and working towards getting the visiting team and match officials to fly back to their respective countries," African football's ruling body said in a statement.

The Algeria squad remain confined to their hotel in the capital, but Khartoum International Airport is expected to reopen on Wednesday at 14:00 GMT

"We are locked in a hotel, powerless, without knowing when we can go home," goalkeeper Chloe N'Gazi said on Instagram on Tuesday night.

"The only information we have is from Twitter or images on Sudanese television."

N'Gazi and team-mates had previously posted pictures on social media from beside a hotel pool.

"A coup d'état has never been easy to live through, even at the edge of a swimming pool under 38 degrees," she added.

"We try to occupy ourselves as we can. Our thoughts go to the Sudanese people."

Algeria's women, who have a 14-0 lead from the first leg, are the second African team to be caught up in a coup in as many months after Morocco's men's side had to be evacuated from Guinea last month in similar circumstances.