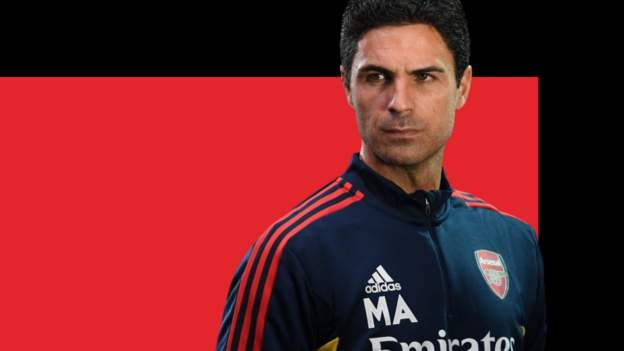 Arteta reveals he had open heart surgery as a child

The new Amazon documentary series, All or Nothing: Arsenal, paints a picture of manager Mikel Arteta as a complex, intense deep-thinker with some very interesting man-management tactics.

We also get a closer look at some of the younger personalities in the Arsenal dressing room, such as Bukayo Saka and Emile Smith Rowe.

The series goes behind the scenes of Arsenal's 2021-22 campaign. It was a particularly dramatic season for the Gunners, who started with three straight losses, got themselves into the Champions League places and then capitulated spectacularly to hand fourth place to bitter rivals Tottenham Hotspur.

Lots to unpack then. Here are three things we learned from episodes 1-3, which are released today.

Many fans will be intrigued to have a glimpse into the mind and methods of Arteta, the Premier League's youngest manager and someone who learnt under the great Pep Guardiola.

The impression we get from this series is of someone who is obsessive, rigorous and tactically astute. In the first episode, midfielder Granit Xhaka calls him "a freak, but in a positive way".

We also, however, get an impression from the series of a manager who wants to bring a personal touch.

Arteta tells the camera: "I cannot treat players as numbers. They are people."

He certainly employs some unique methods to motivate his young squad.

They involve things like getting his players to hold hands, in order to create "energy".

Arteta loves a diagram too. Ahead of a match against bitter rivals Tottenham, the 40-year-old Spaniard sketches out cartoons of a heart, a brain and an Arsenal fan, with the word "energy" connecting them all.

Some viewers may be sceptical, but Arsenal went on to beat Spurs 3-1 that day.

Speaking to BBC Sport this week, Arteta said: "You win the game it works, you don't win the game, it doesn't work. The players responded to it. Then I had to hear them making jokes. In the moment it helped - they didn't expect it."

There is another interesting scene in the first episode when Arteta addresses his squad ahead of a match against Norwich. They have just lost their last three games and failed to score in each.

The Arsenal boss attempts to lift morale by connecting with a personal story about a heart condition he suffered as a child.

He tells his players: "In a difficult moment, you made the best week of my football career."

Again, there is a diagram - showing his fluctuating emotional states during the week, from bereft to back in love with the game.

Arsenal go on to get their first win of the season, against Norwich.

In one scene, he asks team photographer and lifelong fan Stuart MacFarlane to deliver a speech.

Goalkeeper Aaron Ramsdale spoke to BBC Sport, saying: "Arteta's team talks are definitely different. I think he keeps it fresh because sometimes he is writing, sometimes he talks, sometimes he lets some of the lads talk and what not. It keeps you engaged and lets you into his life as well. He is probably the most approachable manager I've had."

Perhaps the most interesting innovation, though, is when Arteta makes his players train to the soundtrack of Liverpool's anthem You'll Never Walk Alone in order to prepare for a match at Anfield - one which they lose 4-0.

"I've never experienced the speakers before," Ramsdale told BBC Sport. "I don't think they'll be coming back! We could all see what the method was."

Whatever you make of Arteta's strategies, it's certainly all fascinating to watch.

Some eyebrows were raised when goalkeeper Ramsdale, then 23, signed from Sheffield United for more than £24m in August 2021.

In fact, the young player actually turned out to be one of the big successes of Arsenal's season, impressing pundits and even making his senior England debut.

"At the very start it was difficult," Ramsdale, now 24, told BBC Sport. "I had a lot of negativity around the signing, with idiots online saying don't sign. Threats saying 'we know where you live' and things like that. Trying to scare me."

He said he switched off his social media, to block out the negativity.

Ramsdale told BBC Sport that he hopes people take away from the series an understanding of how tough it is to be a footballer.

"It's one of the best jobs in the world, but one of the worst at the same time," he said.

In the series, he comes across as one of the loudest characters in the dressing room and committed to success.

For instance, in episode three, Arsenal have just beaten Aston Villa 3-1. While the rest of the dressing room are in jubilant mood, Ramsdale is absolutely furious because they conceded in the last 10 minutes.

"That cost me the clean sheet," he says as coaches try to console him.

Later in the same episode, he berates the whole dressing room following a 2-1 loss away to Everton - calling the performance "embarrassing" and "naive".

"My standards are high," Ramsdale says. "The best teams punish and keep their foot on the throttle for 96 minutes. I'm not selfish. As a team I just felt, definitely on that day and on other days, that we needed to defend properly as a team."

Kieran Tierney, 25, is a popular character among Arsenal fans.

The former Celtic left-back, who spent a lot of last season out injured, comes across as incredibly down to earth. He is open about his chocolate habit and marvels at how much Martin Odegaard is being paid.

In episode three, Tierney shares a little about his working class upbringing in Motherwell, Scotland.

"If you wanted something, you were told you had to work for it. My mum had three jobs - working as a dinner lady and a cleaner. She was up every day at six in the morning."

He also reveals that his mother worried he may end up becoming more of a celebrity than a footballer when he moved to the capital to play for Arsenal in 2019. Tierney, who lives with his friend and live-in chef Johnny, also from a similar area in Scotland, says that he found the adjustment tough at first.

"I was really struggling," he tells the film-makers. "Outside of training, I had a lot of time to think."

Tierney goes on to say that he has two friends who have taken their own lives and that he understands a little about depression.

He adds: "I always feel a certain responsibility to try and help because I know how it feels to be in a certain place."

What led to Curtis Warren's downfall?: Gangster tells the story of one of Britain's wealthiest drug baronsWhy is it a struggle to get an ADHD diagnosis?: Kirsty Craib has spent eight years trying to get assessed without success