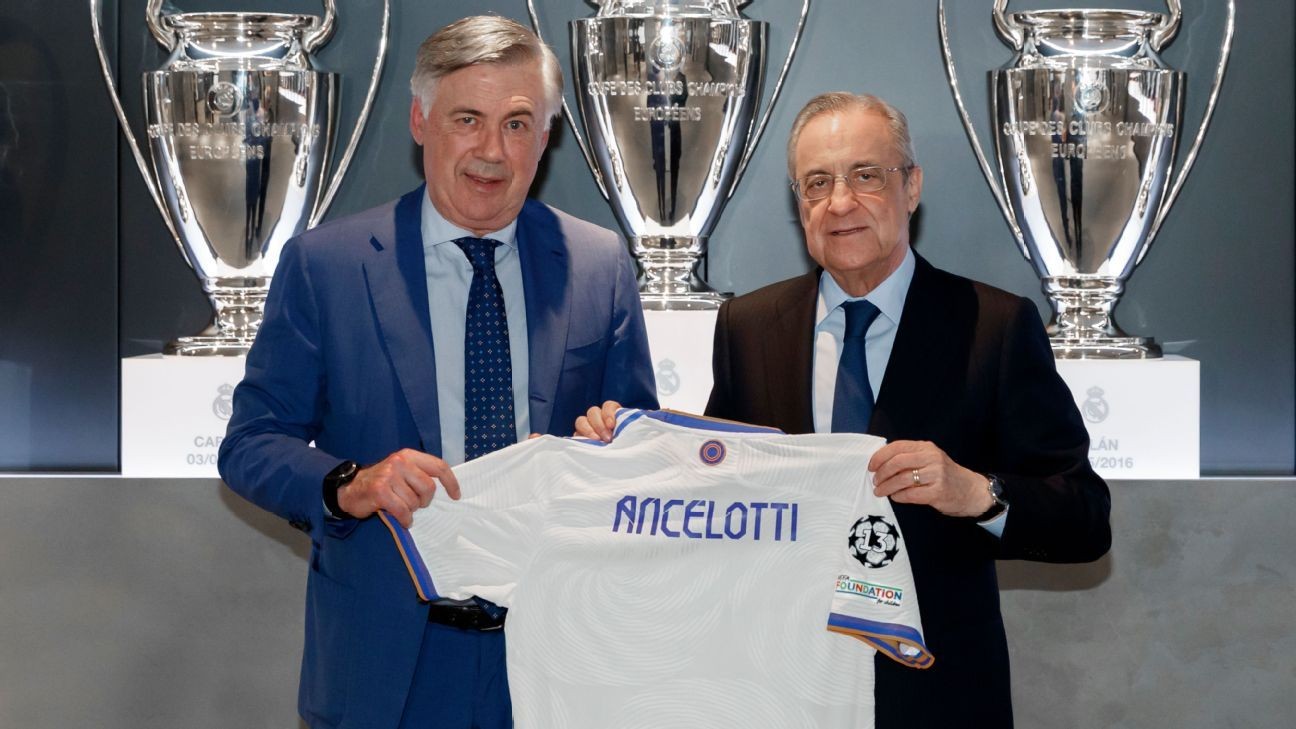 The next time Barcelona play Real Madrid, both managers will be men whose last club was Everton, which poses the question: how long before Duncan Ferguson rocks up at Atletico Madrid?

OK, that's not going to happen. But then this wasn't supposed to happen, either. Barcelona weren't planning for Ronald Koeman to be their coach next season. Nor were Real Madrid planning for Carlo Ancelotti to be their coach; they didn't even know he would be available, still less have him on a shortlist that was getting shorter, names crossed off by the day after Zinedine Zidane left.

Sometimes, though, it's good to talk, and a chance conversation about something else entirely ended up with a "light bulb" moment and the former Everton coach returning to the club he led to their 10th European Cup. Meanwhile an obligatory, awkward conversation and a handful of other, fruitless ones ended up with the other former Everton coach continuing at the club he led to a Copa del Rey trophy and third-place La Liga finish.

Just a couple of days apart, it was done. Both of them.

It wasn't perfect, but it would do. For now.

When Ancelotti was presented before the media at Valdebebas, they kept asking him about the future and the squad he would be working with. Would Sergio Ramos still be there? Would Kylian Mbappe be arriving? Who were they going to sign? In response, he kept saying he hadn't had time to really discuss that yet. In part, because it was the right answer -- and if there was a recurring theme, it was essentially look, this is the squad I have, don't expect a revolution -- but also because it was the truth.

"I was in Liverpool yesterday," Ancelotti said, and he genuinely hadn't been looking for a way out. He was planning the new season for Everton, looking into recruitment plans, which is when an idea formed. What if... wait, really? And so it was.

Koeman, meanwhile, had been hanging on at Barcelona, aware that the club's president Joan Laporta was not that keen in keeping him as manager. Koeman couldn't not be: he'd heard it repeatedly, and so had everyone else. The Dutchman had been part of an inheritance Laporta didn't exactly welcome when he was voted back into power in January. At the time, the president had described the end of the season as "incomprehensible." He had not been subtle about his interest in other coaching candidates, either: Julian Nagelsmann, Xavi, Pep Guardiola and more.

In fact, he could hardly have been more explicit. So explicit that you almost wondered if you should admire his honesty, which Koeman didn't. As the season came towards the end and so, it seemed, did his spell in charge, the coach was asked if he felt mistreated. "These past two weeks, a bit yeah," he said.

2021-22 season start and end dates across Europe: All you need to know

Zidane and Real Madrid: Where it went wrong and what's next

That was the middle of May, and Koeman had just had a much-publicised lunch with Laporta, which resolved nothing.

"The most important thing for a coach is to have the maximum trust from the club. If that's the case, I can continue and I want to continue," Koeman said. It was soon clear that he really didn't have that. After a more formal meeting with Laporta at the season's end, the Barcelona president asked for a bit more time. A "period of reflection," he called it. For reflection, read: "frantic activity in search of a better candidate, a different solution."

He didn't find one, and nor was Koeman going to make it easy for him by walking away. And so, a few days later, Laporta confirmed that Koeman would be the coach.

Why did he decide that? Why, in the same week, had Madrid decided on Ancelotti, too?

First, a pause, a proviso, an apology. This is an ugly, horribly uncomfortable thing to say about two men who deserve enormous respect, a pair of historic figures in the game and at these two clubs, the winners of their first and 10th European Cups respectively, arguably the biggest moments in the clubs' histories... but, well, because they could. Because these men -- men who deserve better -- were what they could get. Or what they were stuck with. Sacking Koeman costs money, after all.

It wasn't exactly enthusiastic; there was no ringing endorsement, no perfect partnership. Madrid president Florentino Perez was not at Ancelotti's largely low-key news conference, and institutional director Emilio Butragueno went through the same formulaic niceties he uses with every new manager.

There was another reason, which sounds even more ugly. So, again, apologies. Not only were Koeman and Ancelotti easy to get, they are reasonably easy to get rid of. Men who can be there until alternatives the clubs feel more enthusiastic about are available. Or before, if needs be -- if things really go bad.

Laporta even described Jordi Cruyff, the man he brought in as an advisor, a kind of unofficial sporting director, as a "comodin" -- a wild card. In other words, a man who could take over as coach if needed. Madrid's decision not to turn to Raul yet was partly about being able to turn to him later.

Things are more likely to go wrong in these circumstances, of course. A former sporting director at one of these two clubs puts it simply: "There are two types of manager: strong managers and weak ones, and once players realise you're the latter, you're dead."

Look at those words from Koeman again: "The most important thing for a coach is to have the maximum trust from the club. If that's the case, I can continue, and I want to continue."

More to the point, look at this: When Laporta had asked for more time, Koeman's agents put a message out on social media. It was swiftly removed, but basically it likened the situation to a couple giving themselves a little while longer to see if they could get someone better. And if not, then they would get married and live happily ever after.

Koeman knows it's not ideal. Ancelotti knows it's not ideal either. "If you listen and read the paper, it's as if we have had a bad season, and I don't agree," Koeman said in mid-May. And he, like Zidane -- who wrote a letter saying so explicitly -- knows that doesn't come out of nowhere. At least, not always.

Ancelotti knows that too: he is well-briefed and well-travelled, well-versed in all this. He knows all about difficult owners and presidents. He's had them all, for better or worse, in sickness as well as health. And that includes this president, this club; a president and club he has fallen victim to before.

In his return news conference, Ancelotti was asked about Zidane's words.

"I've been in football 40 years," he said. "It's normal." It sounded a little like a gentle dig at Zidane -- Come on, mate, you know where you are; you know this -- and it was also just a reflection of a reality he has seen first-hand. Which doesn't mean it doesn't sting.

play1:03 Lowe: Ancelotti is a comfort choice for Real Madrid

Sid Lowe is surprised by Carlo Ancelotti's return to Real Madrid's but calls him a safe choice for the club.

When Ancelotti was sacked last time, he felt mistreated, deeply hurt, let down, stabbed in the back. He felt his sacking was unfair. And yet now he is back -- until, he knows, the next time he is sacked. Koeman continues too, knowing that the sack will come some time. Knowing that it won't be perfect. Knowing that it's not exactly true love and that it doesn't feel quite right. Knowing that one day, the club's eye will rove. They're under no illusions. Life isn't perfect and neither is football. To go back to that post, this is a marriage of convenience.

Sure, but the thing about a marriage of convenience is that it's... well, convenient.

Koeman has been desperate for the Barcelona job for a long time and won't give it up without a fight -- or a finiquito (severance package). Ancelotti loved his time before; the job, the city, the lifestyle. And, who knows, maybe it can work. Maybe they can grow fond of each other again. Which may be pretty shoddy advice for a happy, long marriage, but football's different, however undying a fan's love. And, like it or not, these two men know that. It may be short, but it could be fun while it lasts. And lucrative when it ends.