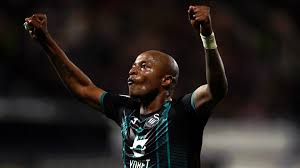 Swansea City vice-captain Andre Ayew is confident the Swans will beat Millwall FC at the Liberty Stadium to extend their unbeaten run to four matches on Saturday.

The 29-year-old has been an essential part of Swansea’s improved form of late and has produced Man of Match performances for the club just before the international break.

Ayew is Swansea’s joint-top goalscorer with six goals to his credit.

The Welsh side are currently fourth on the Championship table after picking up an impressive seven points from their last three matches.

"We will prepare properly. We’ve had good results in our last three games so we must make sure we hit the ground running again,” he told the official club website.

'We want to try to get a good win at home against Millwall. It’s going to be a hard game but, with the quality we have, I’m confident we can get a result."