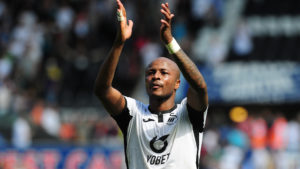 The Black Stars captain scored his second goal of the season from the penalty spot in the 33rd minute of the first half Saturday afternoon against Huddersfield Town.

His appearance for Swansea City against Huddersfield Town was his 100th for the Jacks.

He helped drive coach Steve Cooper’s squad to within sight of a Premier League return as they reached the play-offs last season.

“My first goal versus Chelsea was one of my best moments at Swansea,” he said.

“It was my first game in the Premier League. That season was great for me,"

“I've had great moments and bad moments. I came back in January 2018 to try to help keep us up,"

“I had an injury at the time. I played with it a bit, but couldn't do what I wanted to,"

“Also, almost as soon as I came into the squad, Leroy (Fer) and Wilfried (Bony) got injured - it was a difficult period for me. Jordan (Ayew) also got suspended," he added.

“So, all of a sudden, the strike force I was coming to play with - nobody was there! The gaffer had to mix things up, we nearly did it but we came up short,"

“We were so close to coming back up last season, but I think we lacked a little bit of experience in the game at Brentford. But we've learned from it and will see what happens this season,” he concluded.