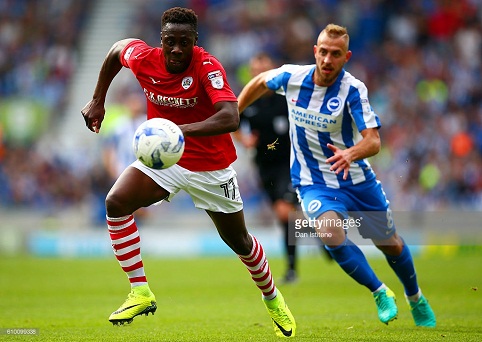 xxxx during the Sky Bet Championship match between Brighton &amp; Hove Albion and Barnsley at Amex Stadium on September 24, 2016 in Brighton, England.

Ghana defender Andy Yiadom is hoping to start this season's English Championship with is club side Reading on a winning note.

Reading will begin the 2018/19 campaign with a game against Frank Lampard's Derby County at the Madejski Stadium on Friday, August 3.

Yiadom, who joined the side this summer from Barnsley, insists that it's their aim to begin the season with a victory.

“We want to go into the new season with a good start,” Yiadom told his club's official website.

“Everyone is looking forward to it – Friday night, under the lights on Sky… hopefully everyone is up for it and we can put a performance in.

“Me and most of the boys are well prepared physically. Everyone is feeling fit and looking forward to the first game of the season – the one that counts!

“Every game is tough in the Championship but we’re looking forward to that challenge. We’re going to put 100 per cent in.

“Each day we learn new things when we come in and we’re going to try to put that into action when it comes to matchday.”

Paul Clement's side will be hoping for a better campaign this time after last season's fierce relegation battle.