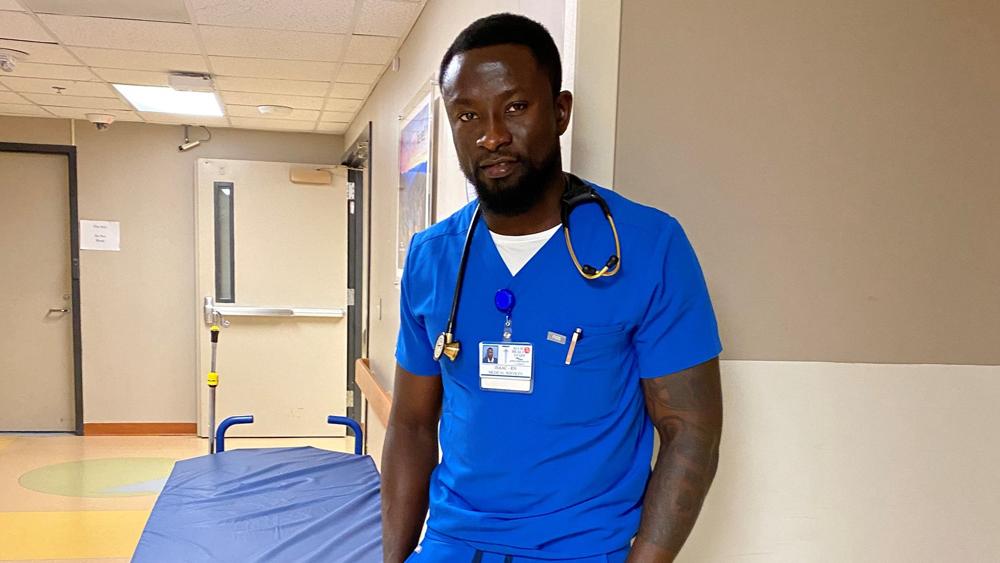 Our nation was built on dreamers and such is the story of Isaac Kissi.

Some 14 years ago he was coming out of a chemistry class at the University of Ghana when he was told there were some American college coaches at the soccer field and they were looking for talented players.

“It was the last day before they were leaving, so I said to our coach, ‘Let me try quick. You never know,’” Kissi recalled. “I actually borrowed a friend’s cleats and hopped into the action and the guys all got me involved.

“Afterward, Paul Souders, the (assistant) coach from Dayton, said he liked the way everyone was drawn to me and my coach said, ‘Yeah, and he’s smart, too.’

“And that’s when Coach Souders said, ‘How would you like to play soccer at the University of Dayton?’

“I’d had chances in the past to go play in Europe, but my parents felt I was way too young to leave home and besides, soccer wasn’t guaranteed. But this was a chance to play and get an education. To me it was a no-brainer.

“I had no clue where Dayton was, but I was like, ‘Hey, I don’t care. It’s somewhere in America!’ And back then every kid in my neighborhood had hopes of coming to the U.S.”

In those days he said he embraced a popular world view of America:

“America was the beacon of hope for everyone. There could be turmoil in the rest of the world, but America would step in and say, ‘Hey, knock it off! Get it together!’

And since leaving Ghana, the 33-year-old Kissi has done just that.

•He starred at the University of Dayton, leading the Flyers in goals and points as a senior and being named the team MVP and an All-Atlantic 10 first team selection. He got his degree and was drafted in the third round of the 2010 MLS Draft by Chivas USA.

He played three season with the Rochester Rhinos of the USL before knee injuries all but shelved his career. He did return in 2018 to play for the Rochester Lancers of the NPSL, is the general manager of the Roc City Boom, a UPSL team in Rochester, and now he’s helped open a pipeline of talent from Ghana to UD that’s brought the Flyers some top players recently.

•He also graduated from the University of Rochester nursing school in 2016 and now is a registered nurse who’s spent the past several months working on the front lines in the COVID-19 battle.

He worked in the ICU unit at Mercy Hospital of Buffalo, where he was engulfed in the nonstop life and death struggles at the height of the pandemic in New York. And now he is doing COVID-19 testing in Rochester for the government.

•And in 2017 he proudly became a United States citizen.

Through all of this, Kissi has fully eclipsed some of those skewed theories and negative stereotypes too many people are embracing these days. Their narrow view of America is not what Kissi grew up idolizing and it certainly is not what made America great.

Our strength has come from a diverse collection of dreamers from all over who make a positive impact in our melting pot nation.

Kissi is that in many ways. He is:

—A black life that matters in so many ways.

—A guy who puts himself on the line every day to help get the rest of us through the perils of COVID- 19. And in the process he is a voice of caution and reason when too many people are floating false narratives about the deadly pandemic.

And along with all this, he’s also dealt with a heartbreaking loss of his own.

His beloved father, Samuel Kissi – who did so much for him and his three siblings when they were growing up – had been in declining heath for the past several months.

Last year Isaac had begun the procedure to bring his dad to America to get better medical treatment. But even though all the proper paperwork had been done for months, he said he was told by government officials he needed more proof that this was his dad.

But the unnecessary red tape took a deadly toll.

His 63-year-old father died in Ghana a couple of weeks ago. The paperwork finally had cleared a few days earlier, but by then his dad was too sick to travel.

Although he’s continued with his COVID-19 testing work, Isaac was forced to drop out of the classes he was taking to become a nurse practitioner. He wouldn’t be able to finish the semester.

He is headed back to Ghana in eight days and the family will hold his father’s memorial service on Aug. 1.

‘This is not fake’

Samuel Kissi and his wife Comfort raised their four children on the principles of hard work and the strength of family.

“My dad worked with all his might and strength to put us all through college,” Isaac said. “He worked as a driver and transport officer with the electricity company in Ghana. He would take the engineers to different sites.

“He saved everything he could, so instead of staying in hotels on those trips, he’d sleep in his car or stay with a friend or just sleep on a bench somewhere. That way he could save those extra bucks and put them toward our tuitions or maybe get me those soccer cleats I had been pestering him for.”

All four of the children did go to college.

It helped that Isaac got scholarship money to go to UD, but he admits it still wasn’t easy for him in the beginning:

“It was a big culture shock and I had to adjust to the weather – I didn’t have warm clothes – and I had to get used to the food, too.”

What compounded his homesickness – something he said he told almost no one about – was that before he’d left Ghana, he and a young woman there had had a baby daughter.

“It surprised us both,” he said. “Our daughter was a gift from God. That’s why I named her Gifty. Her mother was amazing. She understood the situation and my parents got involved, too, but I never spoke about it in Dayton. I didn’t know how people would react.”

“I remember I’d just gotten out of class and was walking past the athletic building and met Coach Souders. He was like, ‘How’s it going? Talk to me.’

“And that’s when I just broke down. There was all the craziness of a new place and my daughter at home and on top of that, I’d just lost my wallet and all my money.

“Coach Souders and Coach (Dennis) Currier both spoke to me and they gave me avenues to follow and resources that were available at school and that went a long way.

“Most of all I had to come to the realization that I wasn’t just living for myself now. I had a daughter. And I had a whole lot of other people looking up to me. And with my dad, I just wanted to make him proud.”

He did that on the soccer field and in the classroom.

And when injuries shortened his athletic career, his older sister, Gloria, who’s a nurse in the Navy, suggested he try nursing because he was good in the sciences and had had some first-hand experience with his own medical care.

He became a traveling nurse and worked in Fayetteville, N.C. and Syracuse. And he was at Mercy Hospital of Buffalo when the COVID-19 surge began.

“In the ICU I’d turn the intubated patients, run the drips, look at the vital signs,” he said. “We took care of lot of people. We discharged a lot and saw a lot die, too.

“Because their family and friends couldn’t see them, you became more than just their nurse. You became family.

“The older population sometimes can’t operate their phones so you make the calls for them. You try to set up FaceTimes with their families and you encourage them to eat.

“And sometimes you didn’t even get to say goodbye. You’d go home and the next day they weren’t there. You were told, ‘We lost them overnight.’

“But there was no time to grieve because we had more and more patients. It was scary at times. We were reusing PPE. That’s something you’re not taught in nursing school.

“It was tough. My mind went to some dark places during those times. It got to the point where I sometimes questioned my faith: ‘Why is God making this happen? These are good people and through no fault of their own, they contracted this.’”

Now he’s working at a COVID-19 testing site set up at Monroe Community College in Rochester.

After being immersed in the coronavirus battle, he said: “It hurts me to hear people politicizing this and saying the virus is a hoax. I try to educate them. I tell them I’ve seen people drop like flies.

“I’ve seen so much pain and sadness. This is not fake.”

‘A great place for me’

He continues to give the best care he can no matter who he ends up treating.

“I’ve taken care of people with swastika tattoos and peopled dressed head to foot with the Confederate flag,” he said. “But you suspend all that and try to go above and beyond.”

He said, now with so much getting polarized and politicized, we instead “need to pull together more than ever.”

He said people there bought into the precautionary steps early and adhered to them since.

Yet, for all the fractures he now sees here, he said he still believes “America is one of the greatest countries in the world.”

He appreciates the multiculturalism of the nation: “It’s the only super group country where you can add your native country to your designation. We have African Americans, Italian Americans, Irish Americans. That’s not the case other places.”

After his father’s memorial he plans to bring Gifty – she’ll be 15 in November – back to Rochester with him. And he’s hoping to get paperwork cleared to bring his mother, too.

He’ll go back to the University of Rochester to finish the nurse practitioners’ program and he hopes to keep his hand in soccer, both playing and giving personal 1-on-1 instruction to young players.

He said one day he wants to return to Ghana and open a small clinic with his sister:

“We want to mimic the health care system we have here so when you’re back home and you hear someone in your family is sick, it doesn’t mean it’s a death sentence.”

Another hope for him is to one day return to the University of Dayton:

“I’d like to be involved with Dayton someday. It was a great place for me. The decision I made to come to UD as a teenager, I‘d make it 100 times more now. I was able to do so much thanks to Dayton.”

He became an American citizen.

And just like he once dreamed, he has made a difference.