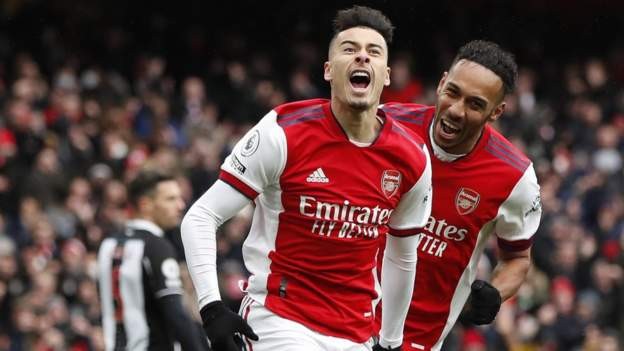 Arsenal eventually broke Newcastle United down to leave Eddie Howe's side bottom of the Premier League without a win.

Howe, in the Magpies dugout for the first time after missing last weekend's 3-3 draw with Brentford because of Covid, set up a team to try to contain Arsenal and eke out a point.

It appeared as if the strategy might be working until Bukayo Saka slotted home from Nuno Tavares' through ball in the second half.

Saka went off injured and his replacement Gabriel Martinelli scored with his second touch, a wonderful volley from Takehiro Tomiyasu's clipped pass over the top.

"He wasn't comfortable. He felt something," said Gunners boss Mikel Arteta of Saka as they await news of what is wrong with the England international.

Both sides had hit the woodwork in an otherwise uninspiring first half.

Jonjo Shelvey's long-range drive was tipped on to the bar by the diving Aaron Ramsdale - and Pierre-Emerick Aubameyang hit a sitter off the post from six yards out.

Arsenal remain fifth in the Premier League, while Newcastle are five points adrift of safety with just over a third of the season gone.

A lot to do for Howe and Newcastle

Newcastle are on their longest ever winless run from the start of a league season. Only one side has ever stayed up in the Premier League after failing to win their opening 13 games - Derby County in 2000-01.

The Magpies know the further adrift they are on 1 January, when they have a chance to spend some of their Saudi owners' money, the harder it will be to attract quality players.

It is unlikely though that Howe will have identified Emirates Stadium as a place to pick up points. The Gunners have won their past 10 home games against Newcastle in all competitions, and have never lost a Premier League home game against the team bottom of the table.

The side he put out looked attacking on paper but on the actual pitch they sat in and tried to frustrate Arsenal.

Shelvey was their main threat when they went forward with five of their nine efforts on goal, including a fine strike tipped on to the crossbar by Ramsdale.

Callum Wilson was isolated up front, with only 13 touches, but he felt he should have had a penalty when he was nudged over by Tavares in the box - moments before Arsenal's second goal.

The Gunners' quality eventually showed when Saka finished off a nice passing move, which also involved himself, Emile Smith Rowe and Tavares.

Martinelli's glorious volley past the onrushing Martin Dubravka - making his first Newcastle appearance of the season - wrapped things up.

Arsenal are back to winning ways now, after last weekend's 4-0 thrashing by Liverpool ended a 10-game unbeaten run.

They should have won by more, with 23 shots - including Aubameyang hitting the upright after Dubravka had parried Smith Rowe's header when a goal looked inevitable.

Next up for Newcastle are two huge ones - home games against Norwich City and Burnley, the other two teams in the relegation zone. They will have to face the Canaries without captain Jamaal Lascelles and Matt Ritchie, who both picked up their fifth bookings of the season at the Emirates.

Benjamin White (Arsenal) wins a free kick in the defensive half.

Attempt missed. Gabriel Martinelli (Arsenal) right footed shot from the right side of the box misses to the right. Assisted by Takehiro Tomiyasu.

Attempt saved. Allan Saint-Maximin (Newcastle United) right footed shot from the left side of the box is saved in the bottom right corner. Assisted by Fabian Schär.

Attempt saved. Joseph Willock (Newcastle United) right footed shot from the left side of the box is saved in the top left corner. Assisted by Allan Saint-Maximin.

Attempt missed. Alexandre Lacazette (Arsenal) left footed shot from the left side of the box is close, but misses to the left. Assisted by Gabriel Martinelli following a fast break.

Pierre-Emerick Aubameyang (Arsenal) is shown the yellow card for a bad foul.

Miguel Almirón (Newcastle United) wins a free kick in the attacking half.