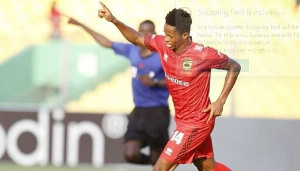 The 18-year-old scored a brilliant goal to propel the Porcupine Warriors to victory over Bibiani Goldstars last Friday.

He has scored two goals and provided two assists after three matches into the season.

Reacting to Isaac Oppong’s performance, the former WAFA trainer said, “He is an intelligent player, he is able to read and analyze the game. Look at the way he scored the goal, he just saw a little space and then put a spin on the ball and that was it. It takes a player with high game intelligence to be able to take that decision within that limited space

“Am proud of him, he is a young chap I will talk to him to keep his focus so that he doesn’t become complacent and will be able to deliver” he said.

Asante Kotoko have a 100% record winning all three games in the 2021/22 Ghana Premier League season.