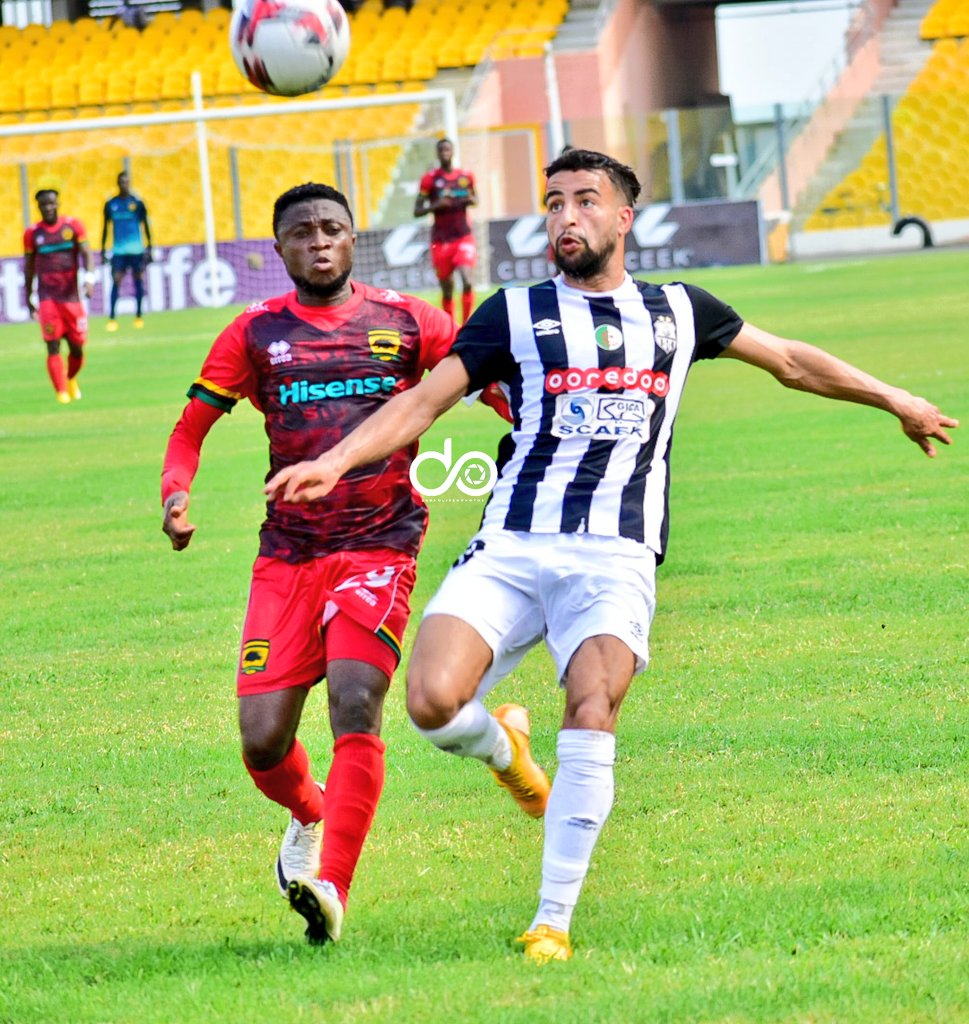 Asante Kotoko on Sunday afternoon suffered a 2-1 defeat to ES Setif at the Accra Sports Stadium in an encounter in the playoff round to the CAF Confederations Cup.

The footballghana.com team brings to you’re the player ratings of all the players that feature for the Porcupine Warriors club on the matchday.

With protection from a solid back four in the most parts of the match especially in the first half, the Asante Kotoko goalkeeper had little to do.

Unfortunately, the two crucial moments when he was tested resulted in goals, giving ES Setif the win.

He cannot be blamed for conceding but in a game where he didn’t really make big saves, he finishes with a rating of 5.5.

Arguably the best left-back in the Ghana Premier League at the moment. The full-back was a constant threat to the opponent when he overlapped and added needed support to the attack of his team. But for a poorly taken free-kick in the second half, he would have scored more points.

The defender worked his socks off through the game. Unfortunately, he ended up misplacing a few passes in the final third that saw Asante Kotoko giving away possession to ES Setif. Certainly not his best outing.

Solid at the back, a pillar as always. The centre-back had many good moments but didn’t have the best of communications with his partner Yusif Mubarik. With Kotoko conceding two goals that could have been avoided [at least one], Ismail Ganiu can be content with his 6.

Mostly out of the game because of indecisions on his positioning, the centre-back finishes with a rating of 5.8.

He had a lot of work to do on the afternoon and allowed ES Setif players to skip past him on a number of occasions. Mubarik will need to do better next time.

Tried his luck from distance a few times but never threatened the ES Setif goalkeeper. Helped the midfield of Kotoko with his impressive work ethic but could have done better to help Latif Anabila dominate the opponent.

Another impressive performance from the Reds midfield maestro. Use his experience well to marshal the midfield of the encounter.

His tackling, passing, and interceptions play a huge role for the club and is one of the best performers of the team on the afternoon.

A good showing from the Brazilian against the Algerians as Fabio Gama earned cheers from the Asante Kotoko supporters occasionally.

The brilliant midfielder knew when to turn, switch play, and send a pass to his teammate. He found Kwame Opoku with a delightful pass that almost resulted in a goal. He deservedly earns a score of 7.

The captain of Asante Kotoko led by example with his work ethic. He run the show in crucial moments and executed his role to the delight of fans.

It was therefore not surprising when he assisted Kwame Opoku for the home team’s only goal of the match.

Precise as always, clinical as expected, ‘Bayie’ the silent killer had a fantastic day at the office and probably shouldn’t have been on the losing side. He scored the only goal for Asante Kotoko with a cool finish that excited fans at the stadium.

The strike partner of Kwame Opoku did work hard for the team but his quality didn’t count. Losing 2-1, Naby Keita stepped up to take a penalty kick but missed after his effort was saved by the ES Setif goalkeeper.

The midfielder replaced Emmanuel Sarkodie but there was not much he could do. For his little impact he is scored 4.