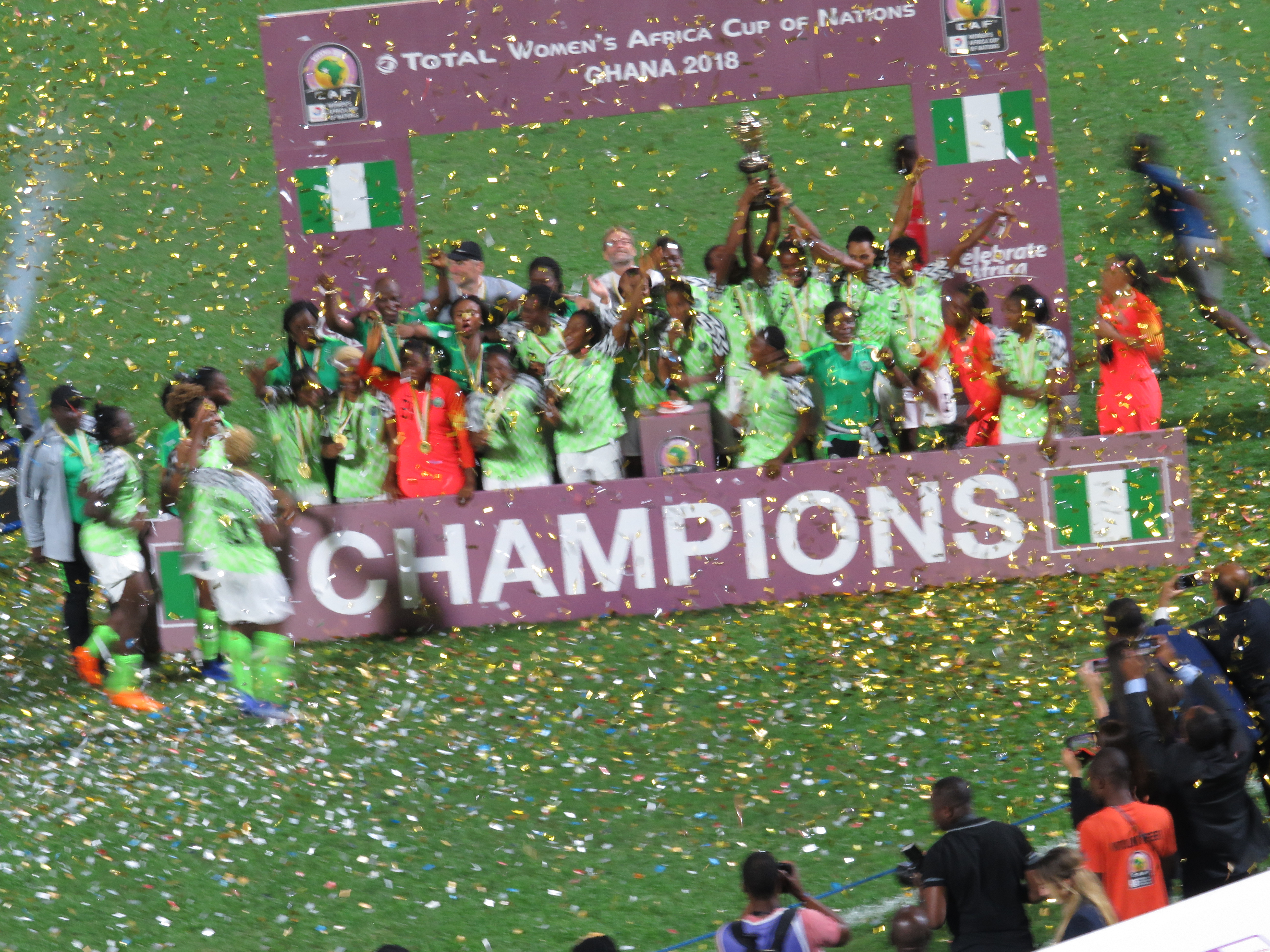 The Super Falcons of Nigeria encountered Banyana Banyana of South Africa in the finals of the 2018 Total Africa Women's cup of Nations held in Ghana.It was hosted by two cities thus Accra and Cape Coast.

It started with Nigeria reluctant.Until goalkeeper Christen Swart first ball had it thwarted to the dismay of Banyana Banyana fans in the early stage of the game.They restored their calm to tactical approach dominating all along.

Enigmatic display by the South Africans continued with absolute power in the midfield, having Linda Maserame and Chrestinah Kgatlana operate from both wings.Causing damages to Mavis Ohale and Onome Ebi, central pair of  Nigeria.

South Africa's Jermaine Seoposewe arrived as a tormenter to handle.Recording numerous free kicks which on all attempt got saved by goalkeeper Oluchi Tochukwu.

Nigeria after first quarter of the game, settled with a pattern to register the first goal at the Accra Sports Stadium. Having Asisat Oshoala relying on the defensive weakness of Banyana Banyana left back, Nothando Vilakazi.At a moment had to tackle the mantle of experience by triggering a drive.But was eventually interjected.

Oshoala header from a corner kick missed inches from the goal post, a minute to 20' .Deadly ball as it was initiated from the home of the Falcons got punched away.Denying Nigeria an opener.

Banyana Banyana who possed to make history could not curtail the 10 time Africa's champions.Unable to stand the path of Halimatu Ayinde successfully ending a pass to Ngozi Okobi, pulling a powerful strike. However Swart game to the rescue of his team.

The defending champions despite threatening the defense line looked punishing South Africa.Seeing every ball been possessed, smearing danger occasionally.Even though, Nigeria stood the chance of breaking the deadlock before break.But proficiency to finish up at post.

Second half of the titanic clash, wasted no time for Banyana Banyana pushing more strength upfront.Chrestinah Kgatlana thirteen minutes of the second department poor first touch  in the half of Nigeria cost her, when she failed to have it the second time.

At became an open tactics where both teams had to hunt for goal in the latter part of the game. 73rd minute defensive error resulted to referee Gladys Lengwe point to the spot.Following Swart hard tackle on Francisca Ordega.Oshoala, reigning CAF Female Footballer of the year miss the golden opportunity.

Swart impressive touch off Oshoala strike was enough to give Banyana Banyana a life to hold on in the extra time.Both shot stoppers were hindrance to goals.Oluehi ochukwu had straight of Chrestinah Kgatlana ball in hands.

Spot kicks had to prone to decide who is crowned 2018 Total Africa Women's cup of Nations. Recording Banyana Banyana of South Africa miss two from the spot from five kicks.Whiles Nigeria executed four.

The Super Falcons of Nigeria has attained another trophy as champions of 11th edition of the Total Africa Women's cup of Nations for the 11th times.Defending 2016 Cameron AWCON.