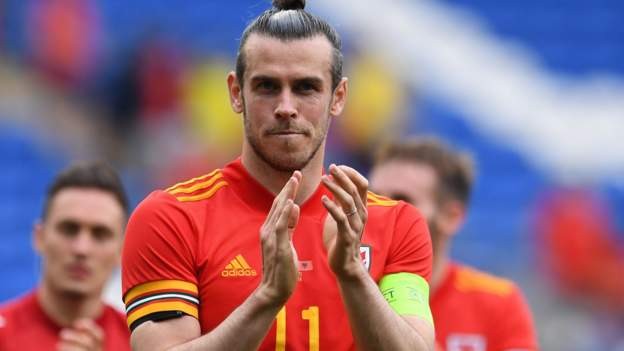 Gareth Bale says captaining Wales in their opening match of Euro 2020 against Switzerland on Saturday will be a career highlight.

Bale then succeeded Ashley Williams as permanent skipper when the defender retired earlier this year.

"It's going to be a massive honour to wear the captain's armband," said Bale.

"It's a huge honour anyway but to be leading your country out into a major tournament is going to be one of the highlights of my career."

Bale is Wales' all-time leading goal scorer with 33 from 92 appearances and he struck in all three of their Euro 2016 group games.

Although the former Tottenham player has gone 11 matches without scoring for Wales, he feels fit and in fine form after a strong end to the season on loan with Spurs.

"Like I've always said from when I started and when I was scoring loads of goals, it doesn't matter who scores - it matters about the result," said Bale.

"I haven't scored for a while but I've made maybe six or seven assists in that time. So I'm still contributing in terms of goals.

"I'm not worried. I know where the back of a net is and hopefully if a chance arises I'll be able to take it."

Wales and Switzerland have been drawn alongside Italy and Turkey in Group A. Italy beat Turkey 3-0 in Friday's opening game.

Whereas Wales exceeded all expectations by reach their first major semi-final at Euro 2016, Switzerland have failed to live up to their billing as their nation's golden generation.

After winning the 2009 Under-17 World Cup and finishing as runners-up at the 2011 Under-21 European Championship, Switzerland had hoped to be flourishing in senior tournaments by now.

Current captain and Arsenal midfielder Granit Xhaka featured in both those teams, while Liverpool playmaker Xherdan Shaqiri and Borussia Monchengladbach goalkeeper Yan Sommer are among the many members of this Euro 2020 squad who played for the Under-21s in 2011.

But despite qualifying for seven of the past eight senior finals - one as co-hosts of Euro 2008 - Switzerland have failed to go beyond the second round.

"I have a good feeling. We have had good preparations and of course expectations are high," said Xhaka.

"We have high expectations of ourselves and also from the outside, the public expect a lot from us.

"We don't want to talk, we want to achieve."

Wales have a fully fit squad of 26 players to choose from to face Switzerland.

Juventus midfielder Aaron Ramsey missed training on Thursday but said that was planned and has declared himself available.

Wales interim manager Robert Page said: "To get to the eve of the competition with a full squad of 26, credit must go to the backroom staff and medical team.

"I spoke to Aaron a month ago and we had a great conversation about what he needed.

"That's the way football is going - it's about what we need collectively and then, individually, sometimes it's about a bespoke plan and we've done that with Aaron, and we've done it with Gareth [Bale] in the past. It's worked."

Wales' team selection has been a big talking point in recent weeks, with supporters and pundits questioning why striker Kieffer Moore has not featured more regularly.

Moore scored 20 goals for Cardiff City in the Championship this season and played an important role in Wales' qualification for Euro 2020, but has started only two of their past eight matches.

Page has preferred to play without a conventional striker recently, instead opting for a false nine in a 3-4-3 formation.

"No need for debates. I've been set in my starting XI for some weeks now," said Page.

"Before every friendly, don't read anything into formations or personnel. It's always been about the team against Switzerland, which I already know, and playing the personnel for us to achieve that."

What are Wales' chances?

"Wales have been given a tough group with both Italy and Switzerland rated higher by our World Ranking and Turkey's rating only just behind the Welsh. Due to this, the Wales team are the 18th most likely to make the knockout phase but they do have more than 50% chance of playing in the last 16 (53%).

It would be a huge shock if Wales were to win Euro 2020 as Gracenote gives them just 1.3% chance of doing so. The team's opening fixture against Switzerland is a crucial one if they are to progress. Wales have 28% chance of winning and 28% chance of a draw but the Swiss are favourites here."

This is the first meeting between Wales and Switzerland at a major tournament. In all competitions including friendlies, Switzerland have won five of their seven encounters, with Wales winning the other two, including their most recent meeting in 2011. At Euro 2016, Wales became the first debutant to reach the semi-finals of the tournament since Sweden in 1992. Switzerland are taking part in their fifth European Championship. They have reached the knockout stages only once previously, in 2016. Switzerland have scored more than one goal in only one of their 13 games at the UEFA European Championships, a 2-0 win on home soil against Portugal in the 2008 group stages. Wales scored 1.25 goals per game in Euro 2020 qualifying (10 goals in eight games), the joint-lowest of any of the 24 sides to qualify for the tournament alongside North Macedonia. Wales' Gareth Bale has scored in each of his two previous appearances against Switzerland. Aaron Ramsey was directly involved in 50% of Wales' goals in their last major tournament at Euro 2016, scoring one and assisting four. Xherdan Shaqiri has scored or assisted 47% of Switzerland's goals at major tournaments since 2014, netting five and setting up two of his side's 15 goals in that time. Vladimir Petkovic - in charge since August 2014 - is only the second manager to lead Switzerland at three consecutive major tournaments, after Kobi Kuhn (Euro 2004, World Cup 2006, Euro 2008).