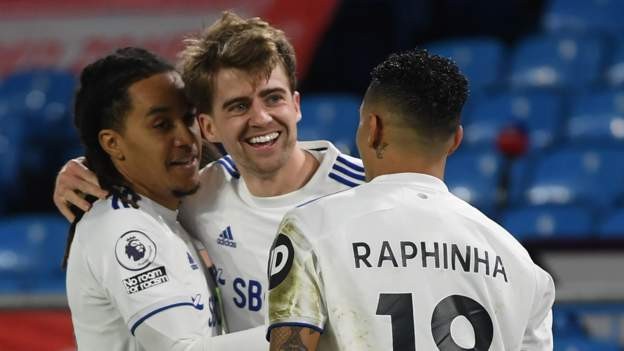 Romeu prevented Raphinha adding to his four goals this season with a superb sliding tackle, but later went off injured

Patrick Bamford scored his 13th goal of the season to help Leeds end a run of back-to-back defeats to extend Southampton's own winless run to a far more worrying eight matches.

The striker struck early in the second half, timing his run to perfection to beat offside and latch on to Tyler Roberts' through-ball before firing a low shot into the far corner.

A neat Stuart Dallas finish from the edge of the box and Raphinha's superb free-kick sealed the points.

Prior to the opener Leeds had been somewhat on the back foot, with Jan Vestegaard and Nathan Tella spurning good early chances for the Saints, who were also aggrieved at two refereeing decisions.

The first was a penalty awarded on the pitch after Tella went down in the box, but rightly overruled with VAR showing the forward kicked defender Diego Llorente and not the other way round.

They were more unhappy that a quickly taken free-kick and Che Adams finish that was ruled out, with Andre Marriner indicating that he had not blown his whistle to recommence play.

The home side could have all-but wrapped up the points in the five minutes after the opener, but Roberts fired inches wide before Bamford saw a shot well-saved by Alex McCarthy.

The Saints goalkeeper also saved brilliantly with his foot to stop Llorente scoring his first Leeds goal from close range.

Danny Ings started on the bench for the Saints and was introduced with half an hour to play to little effect.

To rub salt in the visitor's wounds, Oriol Romeu, who had earlier prevented Raphinha shooting after he had broken away with a superb sliding tackle, added to his side's injury problems by limping off.

The win takes Leeds up to 10th in the table with 35 points from their 25 games. Southampton are five points worse off and eight clear of Fulham, whose form has been picking up as the Saints' has been crumbling.

Action and reaction from Leeds v Southampton in the Premier League

If Ralph Hasenhuttl's Saints are to arrest the slide, they must now do so on the road, with each of their next three fixtures being away from St Mary's - at Everton, Sheffield United and Manchester City.

They came into this away fixture - billed by Hasenhuttl as their "most intense game" - with some confidence after taking a point off Chelsea courtesy of a battling display.

And they matched fire with fire early on, pressing high and forcing Leeds into numerous errors on a slippery pitch Bamford described afterwards as more like a winter wonderland than a Premier League surface.

However, as the game wore on and chances went begging, it was clear that the first goal would be crucial.

Bamford's low finish - the first truly incisive strike of the game - proved that, handing Leeds the momentum and adding further weight to the striker's England case.

With Saints now forced to commit more men forward in pursuit of a goal, it left Leeds the space to exploit, which they did with aplomb.

Switching Raphinha to the left and replacing Jack Harrison with Helder Costa gave the Saints full-backs a new problem they were unable to solve.

It was the substitute who set up Dallas for the second goal, which the Northern Irish international dispatched with the tip of his boot.

And Raphinha added the icing with a superb whipped free-kick into the bottom corner after Costa had been dragged down on the edge of the box.

Nobody at Leeds will say so, but with 35 points on the board they must surely now be safe from making an immediate return to the Championship.

Southampton still have work to do.

Leeds players paid tribute to team-mate Kalvin Phillips' grandmother Val, who appeared in the Amazon documentary 'Take Us Home' and died this week'First half good, second half disaster'

Leeds manager Marcelo Bielsa tells BBC Sport: "The difference of the three goals is different to how it was between the two teams, even if I think the victory was deserved. Throughout the game it was difficult to establish differences between the two teams. Even if we had a good offensive game - we created double the chances they did - the dominance alternated.

"When the games are so close, the team that scores first gets the advantage. It is not definitive but has weight.

"Raphinha is a player very necessary because he can unbalance teams by himself. Our game is based on combinations and to have a player who can combine and create in individual actions, that is very important."

"We deserved to lose today because in the second half we have not been playing what we should be against this team. In the first half we showed we can compete as a team, the second half balls in behind was causing us problems and that is too easy. No chance to get something here.

"They came out and played more long balls in behind but the timing for us was horrible, we got caught too many times. The closing down was difficult in the second half and nothing worked quite well. It was deserved, they killed us in the second half."

No English player has more Premier League goals than Bamford

No English player has scored more Premier League goals this season than Patrick Bamford (13, level with Harry Kane and Dominic Calvert-Lewin). Patrick Bamford has been directly involved in more goals in all competitions under Marcelo Bielsa than any other Leeds player (48 - 39 goals, 9 assists). Tyler Roberts has registered two assists in his last three league appearances for Leeds, as many as he managed in his previous 40. Stuart Dallas has netted five Premier League goals this season for Leeds, only once before managing more in a single league campaign (6 in 2014/15 for Brentford). Leeds' Stuart Dallas has scored five league goals this season, the most by a Northern Irishman in the Premier League since Gareth McAuley (six) in 2016-17. Raphinha's strike was Leeds' first direct free-kick goal in the Premier League March 2004, when Stephen McPhail scored against Manchester City. Leeds have scored 43 goals in the Premier League this season, last netting more after 25 games of a top-flight campaign in 1991-92 when they won the First Division (48). Southampton have lost seven of their last eight Premier League games (D1), after suffering just two defeats in their 15 before that (W8 D5). Leeds have kept clean sheets in consecutive home Premier League games for the first time since February 2003 (a run of 4). Southampton have failed to score in four of their last five away Premier League games, as many goalless performances as they managed in their previous 31on the road.

Leeds have the chance to overtake Aston Villa in the table when they host Dean Smith's side on Saturday, 27 February (17:30 GMT). Southampton face three more away games on the bounce, starting with the trip to Everton on Monday, 1 March (20:00).

Hélder Costa (Leeds United) wins a free kick in the defensive half.

Attempt missed. Pablo Hernández (Leeds United) right footed shot from the centre of the box is too high. Assisted by Ezgjan Alioski.

Liam Cooper (Leeds United) wins a free kick in the defensive half.

Attempt missed. Hélder Costa (Leeds United) left footed shot from the centre of the box is too high. Assisted by Raphinha.

Moussa Djenepo (Southampton) wins a free kick in the attacking half.

Moussa Djenepo (Southampton) is shown the yellow card for a bad foul.

Hélder Costa (Leeds United) wins a free kick in the attacking half.

Attempt missed. Stuart Armstrong (Southampton) left footed shot from outside the box is too high. Assisted by Jannik Vestergaard.

Ryan Bertrand (Southampton) wins a free kick in the attacking half.