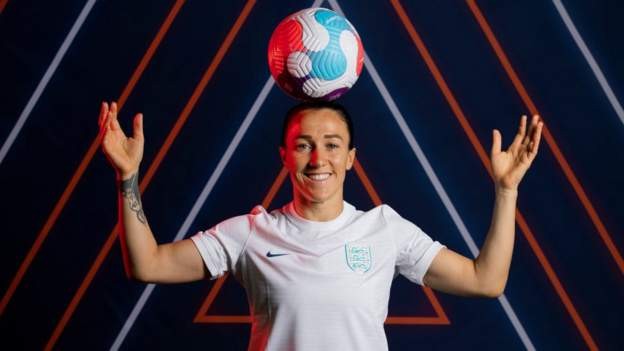 Moving to Barcelona is a 'great opportunity' - Bronze

England defender Lucy Bronze said it was a 'no brainer' to move to Barcelona, adding that she rejected a return to European champions Lyon.

The 30-year-old will join Barca on a two-year deal when her Manchester City contract expires on 30 June.

Bronze played for Lyon for three years but decided against a return to France.

"I had offers from Lyon and Barca, the two best teams in the world. It wasn't bad to be able to pick from that and make my decision," she said.

"It gives me loads of confidence as a player knowing these big teams who are so successful want to sign me."

Barcelona have reached at least the semi-finals of the Women's Champions League in each of the past four seasons, winning it in 2021 and losing 3-1 to Lyon in this year's final.

For Barca's semi-final against Wolfsburg in April, they played at the Nou Camp in front of 91,648 - a world record attendance for a women's match.

Lucy Bronze's last game for Manchester City was the Women's FA Cup final in May, which City lost 3-2 to Chelsea at Wembley

Bronze, who won the Champions League three times with Lyon before rejoining Manchester City in 2020, spoke of her excitement at the new challenge.

"I knew I wanted to play abroad again. My experience at Lyon was the best time and best moments in my career," she added.

"Going out and pushing myself into a different culture, a different experience, playing with the world's best players - to have the chance to do that again was a no brainer.

"Maybe I can't hype doing the same experience again with Barca but I would love to.

"I've not had that experience in England quite the same as in Lyon, hopefully I can do it again."

Bronze, who has played for England 87 times, was named the 2020 Best Fifa Women's Player and will link up with the current holder, Barcelona midfielder Alexia Putellas.

"After the signing, Alexia texted me saying she's so excited to play with me on the team," said Bronze.

"Things like that give you huge confidence when players want to play with you and teams want you."

Bronze, who is in England's squad for their home European Championship this summer, wanted the transfer completed before the competition starts on 6 July.

"The one thing I said to Barca and my agent was 'I want it done before the tournament'," said Bronze.

"I want to focus on playing well for England, I don't want questions about what club you're going to next and all the talk and the gossip around that.

"We've come on heaps and bounds from the first tournament I went to, we got knocked out in the group stage.

"To consistently hit semi-finals, we're obviously doing something right. That little edge we have more than ever is that our players have played for big clubs and played in big matches like Champions League finals."