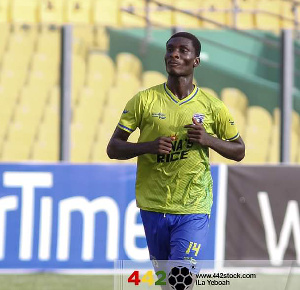 Bechem United has denied media reports that their defender, Samuel Osei Kuffour has completed a move to giants, Asante Kotoko.

Earlier reports claimed Bechem United have agreed on a deal to allow the enterprising defender join the Porcupine Warriors ahead of next season.

The Chief Executive Officer of Bechem United, Kingsley Osei Bonsu, has, however, denied such report and has entreated the public to threat it with the needed contempt it deserves.

“There is no aorta of truth about Osei Kuffour’s move to Kotoko. The club has not even contacted us for the services of the player. Kuffour has just played seven months of the three-year contract he signed with us, so he has a lot of years to serve”

“So, anyone who claim Kotoko are done with the players is not true. I will urge the public to disregard it”

Osei Kuffour has been impressive at the back for the Hunters in the ongoing campaign.